The Israeli startup treating the silent thief of sight

BELKIN Vision is using an automated laser procedure to tackle glaucoma, a disease that can lead to irreversible blindness

TAGS:
Grappling with glaucoma is very difficult. The disease, which is known by its infamous moniker ‘the silent thief of sight,’ causes people to lose their vision gradually, but is unfelt by those diagnosed. In glaucoma patients, high pressure in the eyes damages the optic nerve and can leave people blind within a few years. And while doctors usually administer eye drops, patients don’t always follow up. The chronic disease leads to irreversible blindness, and can affect the 40+ population. Laser eye treatment is more cost-effective than eye-drops, but only few opthamologists who specialize in this complex medical field are able to conduct surgery. BELKIN Vision Ltd., founded by leading doctors, has discovered that perhaps the solution lies in an automated laser system that contains a self-trained algorithm, is cost-friendly, and can be administered in a few minutes annually to help prevent or delay vision loss. “The eye is a very small ball with intraocular fluid that needs to remain at a certain pressure. If that pressure is too high, it pushes the optic nerve - that relays messages to the brain - and causes damage that translates into blindness,” explained Daria Lemann-Blumenthal, CEO of BELKIN Vision, to CTech in an interview. “And it happens gradually. The visual field shrinks but patients aren’t aware of that deterioration. Only once they start experiencing 'tunnel vision,' do they realize that something is wrong. Glaucome is irreversible, and can’t be resolved unlike cataracts, in which the lens in the eye gets old and grows foggy with age, but can be replaced with surgery. Unfortunately, in the case of glaucoma, optic nerves cannot be restored. Thus, early diagnosis of the disease is critical. Classic treatments for glaucoma focus on lowering that pressure in the eye, through eye drops or surgery, but suffer from low compliance, side effects and cost.” 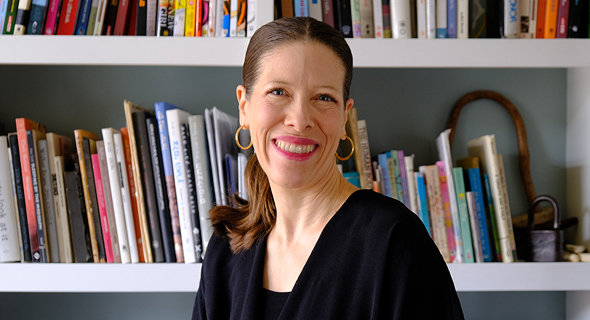 Daria Lemann-Blumenthal. Photo: YML Photography
The company was founded in 2013 by Prof. Michael Belkin, of Tel Aviv University and Sheba Medical Center, an expert in treating glaucoma. BELKIN Vision’s Direct-SLT (Selective Laser Trabeculoplasty) delivers 120 laser pulses in a few seconds to the limbus area, behind the eye’s trabecular meshwork - (the drainage system of the eye) - an area where fluid can accumulate leading to high pressure and blindness. Glaucoma treatments allow the area to self-drain its intraocular fluid. BELKIN’s solution can be used in any clinic or hospital for those diagnosed with early-onset glaucoma. Diagnosing glaucoma in the early stages is critical for patients, and most ophthalmologists recommend that adults starting at the age of 40 get their eyes checked annually. Activating a bioresponse Lemann-Blumenthal added that the eye can be compared to a clogged sink. “Either you can close the tap but then you won’t have water, or you can open the drainage and attempt to fix it. That’s what we’re trying to do by aiming our laser at the trabecular meshwork system in the eye which is like a net that can be cleaned. Over the years, that net gets 'clogged,' and the laser action improves the drainage of that fluid.” That particular area lies between the iris and the sclera (or on the border between the colored iris and white section of the eye), and can’t be seen without a microscope. The earlier glaucoma is detected, the better. Patients who are diagnosed during earlier stages of the disease are searching for non-invasive solutions. Studies show that 50% of patients stopped taking prescription eye drops after a year, leading to further deterioration since the disease is unfelt. But through laser eye treatment, the mechanism can be improved. She explained that the laser energy is absorbed by the pigmented cells in the eye, which in turn activates the white blood cells, and stimulates a bioresponse where the body works to restore the area and reduce drainage. Eagle-eye

In the conventional SLT laser treatments of this type, doctors use a mirrored lens to visualize the area, which helps them divert the laser beams manually to the correct location. BELKIN's offering, aptly named “Eagle” delivers 120 automated laser pulses to different areas within a few seconds, and is automated by a machine. The D-SLT contains a sophisticated image processing algorithm to locate the limbus in the eye. The solution is “painless,” according to Lemann-Blumenthal. Currently, it has been tested at Sheba Medical Center’s Ophthalmology Department, and recently at a multi-center clinical trial – GLAUrious – in Europe and Israel. In order for the treatment to be effective, patients are advised to receive it annually.

Daria Lemann-Blumenthal. Photo: YML Photography
The company is based in the southern town of Yavne. It received funding initially from the Rad Biomed Accelerator program, and has so far raised $19 million through a combination of equity and grants, including from the Israel Innovation Authority and the Office of the Chief Scientist as well as from Rimonci Capital, Santen Ventures, Zig Ventures, CR-CP Life Science Fund, C-Mer Eye Care Holdings, and BioLight Life Sciences. In December, it received a grant through blended financing for a total sum of $19.8 million from the European Innovation Council (EIC). Lastly, Lemann-Blumenthal noted the steadfast interest of Asian venture capital firms in BELKIN’s technology. People of Asian descent genetically have a predisposition to develop angle-closure glaucoma, due to the anatomical structure of Asian eyes. But BELKIN wants to fix that. She added: “If you believe in something, you have to do be proactive about it, not just talk about it.”
Read More: