The new map, which includes nearly 100 companies, a 20% increase from 2020, aims to help multinational companies and VC investors identify Israeli companies and solutions in the field of renewable energy and climate change

The 2022 version of the Israeli EnergyTech sector map featuring nearly 100 carefully screened companies, a 20% increase from 2020, was unveiled on Sunday by Start-Up Nation Central, the Israeli Export Institute, and Israeli energy community Ignite the Spark. From the nearly 180 EnergyTech companies active in Israel, Start-Up Nation Central and Ignite the Spark selected to include in the map the leading companies that focus on energy production, energy flow and distribution, energy storage, carbon capture and offset, hydrogen solutions, and companies that offer consumers consumption-saving solutions. 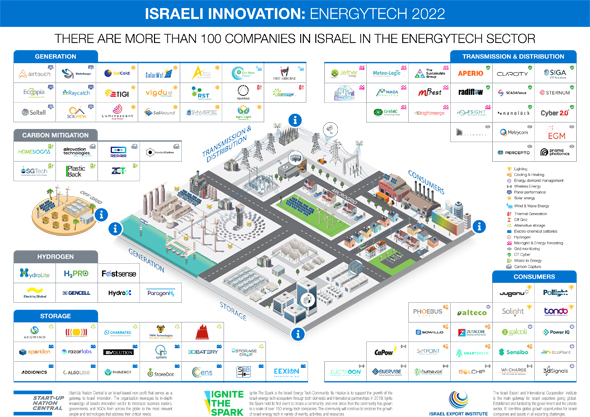 The launch took place at an event held at Start-Up Nation Central with companies and organizations active in the Israeli EnergyTech community who discussed current and future challenges in the field and their solutions. Participants included: Yoav Katsavoy, acting chairman of the Israel Electric Company; Dr. Yael Barash Herman, deputy chief scientist at the Ministry of Energy; Prof. Avner Rothschild of the Technion – Israel Technology Institute, one of the leading researchers in Israel in the field of chemistry and co-founder of the green hydrogen company H2Pro; and Yael Weisz Zilberman, Head of the Climate Tech Sector at Start-Up Nation Central.

The EnergyTech sector map aims to present stakeholders in Israel and around the world – multinational companies, financial entities, investors, decision-makers at the national level, and leaders of multinational initiatives – with the in-depth knowledge, and vast experience available in the wide range of the promising companies currently operating in Israel.

Last year, the EnergyTech sector recorded several significant successes, including two impressive exits, by Driivz and Metrycom, and a record month in which $150 million was raised by H2Pro, Addionics, and Prisma Photonics. Significant international agreements were also signed during this period, and many companies received international grants issued in cooperation with the European Union and the United States (through the BIRD Foundation).

The energy sector is one of the world’s fastest growing sectors, particularly given the global challenges and growing need to reduce total emissions, with around 70% of global greenhouse gas emissions attributed to the energy sector. In last year's climate change summit in Glasgow, global players made significant commitments to reduce emissions and make drastic policy changes in energy production and consumption. Israel’s Prime Minister Naftali Bennett also promised that he would work to advance breakthrough technologies in the energy and climate field, to make Israeli knowledge and experience available to assist countries and players worldwide to implement adaptation and mitigation processes in the fight against climate change.

"Start-Up Nation Central sees EnergyTech specifically and ClimateTech in general as the sectors that have the most significant growth potential in the Israeli ecosystem." Start-Up Nation Central, Head of the Climate Tech Sector Yael Weisz Zilberman noted. "The mapping of companies and broad accessibility of Israeli technological solutions, along with other activities, enable the entire sector to expand its activities."

Not just unicorns, but gigacorns

"We see a movement of entrepreneurs to this field due to the global interest in renewable energy and energy storage," said Eshel Lipman, co-founder of the Ignite the Spark community. "Thanks to the strong ecosystem that is growing in Israel, the diverse community we have built, and the global partnerships we have access to as part of the collaboration with Start-Up Nation Central, we now have a chance to establish dozens of ‘Gigacorns’ -- unicorns that have a strong potential to fight climate change by employing technology to achieve a reduction of gigatons of carbon dioxide per year."