Uzi manufacturer IWI is a subsidiary of defense holding company SK Group, which is aiming for a $560 million pre-IPO valuation

TAGS:
Defense holding company the SK Group, owned by Israeli businessman and entrepreneur Samy Katsav, is planning an initial public offering on the Tel Aviv Stock Exchange, according to several people familiar with the matter who were interviewed by Calcalist on conditions of anonymity.

The SK Group includes several security and defense focused subsidiaries. Among them are Israel Shipyards Ltd., one of the largest shipbuilding and repair facilities in the eastern Mediterranean, and Uzi manufacturer Israel Weapon Industries Ltd. (IWI). 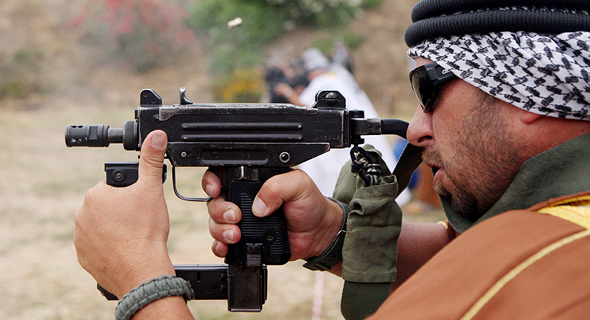 One of the first submachine guns to utilize a telescoping bolt design allowing for shorter weapons, the Uzi, first developed in the late 1940’s, was for decades one of the most widely sold machine guns in security markets in the world. Currently, in use in the war in Syria, the small submachine gun was used in military conflicts in the Middle East, in the Vietnam War, the Falkland War and in drug wars in Central America. It also proved popular in filmed productions, starring in movies including Brian de Palma’s Scarface (1983), James Cameron’s The Terminator (1984), and Kazuo Kiriyama’s Battle Royale (2000).

The IPO is expected to fund SK Group's entry into the Indian market. In May, IWI opened a new small arms manufacturing facility in Malanpur, in the Indian state of Madhya Pradesh, as part of a collaboration between the company and the New Delhi-headquartered group Punj Lloyd.

According to a statement made at the time by Ashok Wadhawan, president of Punj Lloyd's manufacturing business, the facility's products will not be exported but are intended for the use of India's forces. IWI was acquired by the SK Group in 2004 from state-owned weapons manufacturer Israel Military Industries Ltd., as part of a privatization process. The company manufactures small arms like the Uzi, the Tavor assault rifle and the Negev light machine gun. IWI employs some 1,200 people and generates around $560 million (2 billion NIS) a year according to market estimates. Mr. Katsav's daughter is the company's marketing communications manager. The SK Group has already started planning an IPO prospectus and is also considering raising private capital, these people said. The IPO, which is being planned for mid-2018, is set to be the biggest capital funding round this year.

The Group is aiming for a pre-IPO company valuation of $560 million (2 billion NIS), these people said, adding that SK Group has yet to choose an underwriter but is already in talks with Leumi Partners, the investment arm of Israel-based Bank Leumi Le-Israel B.M. Accounting firm Ernst & Young Global is preparing the financial reports for the prospectus.

Mr. Katsav is still contemplating the public exposure that comes with being a listed company, these people said. They added that since the company is handling sensitive security and defense materials and information, it may request certain exemptions from disclosures regarding some of its businesses.

Mr. Katsav and an SK Group spokesman declined to comment.
Cancel Send
To all comments