On Wednesday, the New York-based corporation published a new prospectus for a mutual fund to be offered to the Israeli public

New York-headquartered management corporation BlackRock Inc. is poised to enter the Israeli market, following a 2016 regulatory reform that enabled the distribution of foreign mutual funds in Israel in an attempt to increase domestic competitiveness.

On Wednesday, BlackRock, which is considered to be the world's largest asset manager with around $6.2 trillion assets under management, published a first prospectus for a mutual fund intended for Israeli clients. As Israeli law demands that a foreign fund management company looking to operate in the local market appoint a local representative, Israel-based Altshuler Shaham investment house will be the exclusive distributor of the fund in the country. 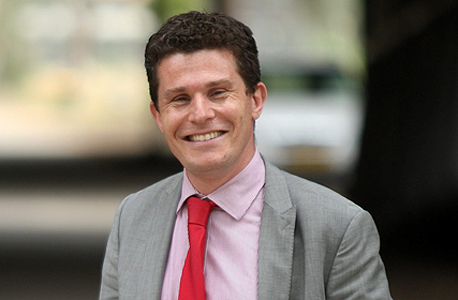 Alex Pollak, Blackrock's country head in Israel. Photo: Amit Sha'al
The fund BlackRock will offer in Israel is BGF (BlackRock Global Funds) Global Allocation Fund A2, active since 1997 and operating in over 40 countries and 30 currencies. It is a fund that invests globally in equity, debt and short-term securities of both corporate and governmental issuers. The fund's management, which numbers 50 people, combines bottom-up asset choice—a focus on individual companies—with a top-down investment approach, meaning a focus on sectors predicted to outperform the market. In Israel, the fund will charge a management fee of 1.78%. The average management fee charged in Israel for mutual funds that specialize in foreign securities is 1.7%, and 0.7% for foreign bonds. The fund’s benchmark index is a composite of 36% S&P 500, 24% FTSE World (ex-US), 24% Merrill Lynch U.S. Treasury Current 5-year, and 16% Citigroup Non-USD World Government Bond Index. When translated to NIS, the fund's recent performance was underwhelming, with returns of 1.74% for 2017 after the deduction management fees, due to the shekel's appreciation against the falling dollar. This is also true for 2016, when the converted returns are 1.73%, and for 2015, when the conversion results in a loss of 1.94%.
Related stories:

Another factor that might deter Israeli investors is that in order to invest in any foreign mutual fund, unlike in local funds, they would be required to open a foreign currency account and exchange NIS to U.S. dollars, an action that will incur currency exchange fees.

The decision to enter the Israeli Market is a direct response to continuous demand from advisors and customers for a varied investment fund under the current macroeconomic conditions, Alex Pollak, Blackrock's country head in Israel, said in a statement
Cancel Send
To all comments
Buzz