In October, Alibaba announced plans to set up offices in Tel Aviv as part of a $15 billion global research and development push

TAGS:
Jack Ma, the founder and chairman of Alibaba Group Holding Ltd., has landed in Israel Monday with a large delegation including senior executives from Alibaba's subsidiaries, two people familiar with the matter told Calcalist on condition of anonymity. 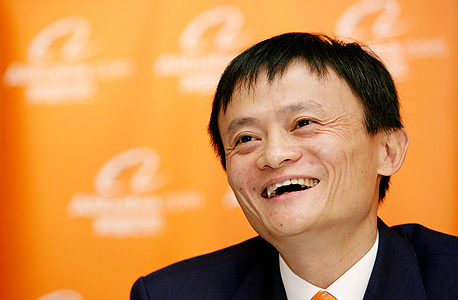 Calcalist first reported the planned May visit in January, revealing Mr. Ma will be awarded an honorary doctorate from Tel Aviv University on Thursday, May 3.

During his visit, Mr. Ma will meet with state officials, local companies and investors, the two people said. He will be meeting with Israeli Prime Minister Benjamin Netanyahu and with Minister of Economy Eli Cohen, representatives for both offices told Calcalist.

Tuesday morning, Mr. Ma will meet with Jerusalem-based venture capital fund Jerusalem Venture Partners (JVP), of which Alibaba became a limited partner in 2015, and with some of JVP's portfolio companies, the two people said.
Cancel Send
To all comments