Mr. Ma arrived on his first visit to Israel Monday. On Tuesday he met with Jerusalem-based venture capital fund JVP

TAGS:
Alibaba’s founder and CEO Jack Ma met with Israeli Prime Minister Benjamin Netanyahu in Jerusalem on Wednesday. In their meeting, Mr. Ma told Mr. Netanyahu that Israel had proven much more “peaceful” than he anticipated. Mr. Ma also said he is impressed with the scope of business opportunities in Israel.

This is the third meeting for Mr. Ma and Mr. Netanyahu, who met previously in China in 2017 and in Davos, Switzerland in 2016. 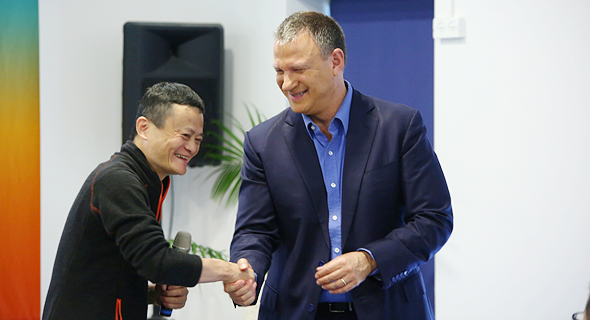 Mr. Ma arrived in Israel on Monday accompanied by a large delegation of senior executives from Alibaba and its subsidiaries. On Tuesday, he visited the offices of Jerusalem-based venture capital fund Jerusalem Venture Partners of which Alibaba became a limited partner in 2015. Mr. Ma told his hosts at JVP that China offers “real opportunity” to Israeli technology companies.

Mr. Ma met with some of the startups from JVP’s portfolio, including e-commerce company SaleUp, cyber company ThetaRay, and Nanit, which developed a technology that analyzes the way babies sleep. Mr. Ma said Alibaba would be happy to collaborate with JVP and help integrate it into the Chinese ecosystem.

On Thursday, Mr. Ma will be awarded an honorary doctorate from Tel Aviv University.