With 241 Startups, and 20% Female Entrepreneurs, Palestinian Tech is Growing

TAGS:
A World Bank report published Wednesday aims to provide a snapshot of the Palestinian tech startup ecosystem by surveying 423 entrepreneurs, investors, and tech workers active in the West Bank and Gaza. According to the World Bank, there were 241 active startups in Palestinian-controlled territories, as of early 2017 when the data was collected.

The report did not specify how many of these startups were based in the West Bank, an area governed by the Palestinian Authority which has experienced a relative political lull in recent years, and how many were based in Hamas-controlled Gaza, where escalating violence and an ongoing Israeli-imposed blockade have been obstructing economic growth. 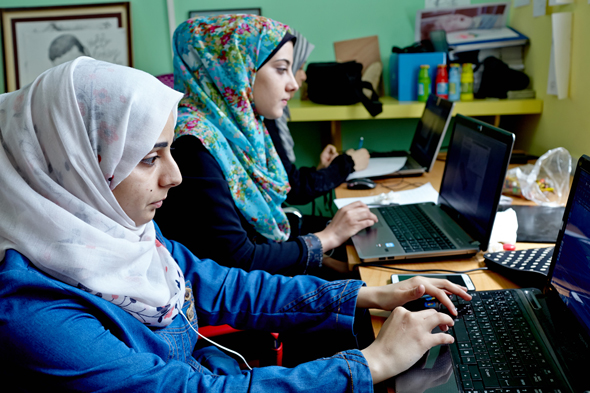 The report is cautiously optimistic. While still young, the Palestinian startup ecosystem is demonstrating steady growth: since 2009, each year saw on average 19 more startup launches than the year before. According to the report, the Palestinian tech ecosystem is characterized by a pool of young, highly-educated but “green” entrepreneurs. 85% of the surveyed Palestinian entrepreneurs had an undergraduate degree and 27% had a graduate degree, but most had little business experience. 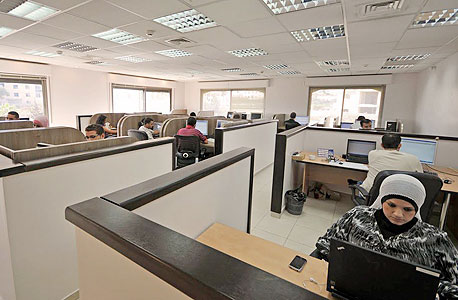 Tech workers in Ramallah, the West Bank. Photo: Guy Hezroni
According to the report, the Palestinian startup ecosystem is supported by a network of 20 domestic accelerator programs, only one of which, Gaza Sky Geeks, is based in Gaza. Most of the accelerator programs operating within the Palestinian tech sector are supported by donors and public funding. Some international accelerators, such as Startup 500 and MassChallenge, are active in the West Bank. The report also recorded 51 investors who were active in the West Bank and Gaza in early 2017, of which about 75% were angel investors and 25% were venture capital firms. Among the venture capital firms active in Gaza and the West Bank are Sadara Ventures, Ibtikar Fund, Jordanian firm Oasis500, Saudi corporate venture firm Raed Ventures, and 500 Startups. These venture capital firms reported almost $150 million in investments in over 40 companies by 2017.
Related stories:
Technological and business growth in the West Bank and Gaza are thwarted by political unrest and surges of regional violence. It is hard to evaluate the economic effects of the continuous Israeli blockade, surveillance, and movement restriction policies. Israel withdrew from Gaza in 2005 but has continued to control Gaza’s borders, airspace, and sea access and is maintaining a blockade severely limiting the movement of goods and people. The report concluded that restrictions on movement and trade have had an impact on the quality and size of the ecosystem, but said that tech is one of the main sectors in the West Bank and Gaza with the potential to thrive in a frayed economy. In January, Israel lifted a restriction on mobile frequencies and equipment that has been in place since 2004, allowing Palestinians in the West Bank to receive 3G mobile service for the first time. People living in Gaza are still restricted to 2G service, which allows for phone calls and text messages, and limited and slow transmission of data. Israeli mobile service transitioned to 3G in 2004 and 4G in 2014. Up until this year, Palestinian users in the West Bank had the choice of lagging behind with local 2G providers or using black-market high-speed services from Israeli providers. Now that high-speed data services are readily available in the West Bank, many believe they will afford new opportunities and support to the growth of the local tech sector.
Cancel Send
To all comments