Jewish, non-Orthodox men take up 74.1% of the country’s tech jobs. Two-thirds of the tech companies that participated in a survey reported having zero Arab employees

TAGS:
How Israeli tech is fairing, and how can it keep growing? Two reports published this week draw opposite conclusions. Both flash out the growing and mostly unmet demand for talent to feed Israel’s most lucrative industry, but while one calls for increased efforts to meet demand by tapping underrepresented groups such as women, Arabs, and ultra-Orthodox Jews, the other pours cold water over efforts to boost inclusiveness, saying the industry has likely reached its peak potential.

Lack of inclusiveness in Israeli tech—where average salaries are twice the national average—is well documented. As numerous reports point out, the industry is made up mostly of Jewish, non-Orthodox men.

In its new report, published Wednesday, The Taub Institute is asking whether the industry can continue its growth trajectory.

Using the OECD Survey of Adult Skills (PIAAC), the report authors concluded there's only limited potential in attempts to bring in more Israelis to the country's tech sector.

Israel’s share of tech workers is already relatively high, and those who are not well-represented in the industry, primarily Arab Israelis and Haredim, or ultra-Orthodox men and women, are “characterized by very low skill levels,” according to the report.

“Most Israelis who are capable of working in high-tech are already employed in the industry,” the report states, going on to say that policymakers “may have to find alternative sources for future economic growth.”

The publication of the report drew unsubtle criticism. Following the report’s release on Wednesday, Naomi Krieger Carmy, IIA’s head of societal challenges division, called it “racist” and “discriminatory” towards women and minorities. She went on to say the report ignores the untapped human potential of Israel’s peripheral towns.

The IIA and SNC’s report, published Sunday, emphasizes diversity as one solution to the local talent shortage. Based on a survey of 362 local and multinational tech companies employing over 82,000 people collectively, the report found there are currently some 15,000 unfilled positions in the domestic tech sector.

Jewish, non-Orthodox men make up 38.3% of the general working population, but take up 74.1% of tech jobs. While they make up 40.2% of the Israeli workforce, Jewish, non-Orthodox women make up only 30% of the employees in the surveyed companies and only 23% of the tech professionals working in these companies. Their ranks diminish further when it comes to management roles: women hold only 16% of tech management roles.

Making up 17.4% of the general working population in the country, on average, Arab employees make up just 3% of Israel's tech professionals. Two-thirds of the surveyed companies reported having no Arab employees at all.

Ultra-Orthodox men and women, making up 4.2% of Israel’s workforce, now hold only 0.7% of the country’s tech jobs.

The report ends with an explicit call for tech companies to look for employees among these underrepresented communities, which are gearing up to have a more significant piece of the national tech pie. In 2016, the report said, 2,222 Arab students were studying tech-related professions. From 1985 to 2014, there had only been 1,598 Arab students studying to become tech professionals. Today, Arab students make up 18% of all computer science students in the country.

Similarly, ultra-Orthodox women are studying software engineering, with an average of 600 of them completing associate-level degrees each year. 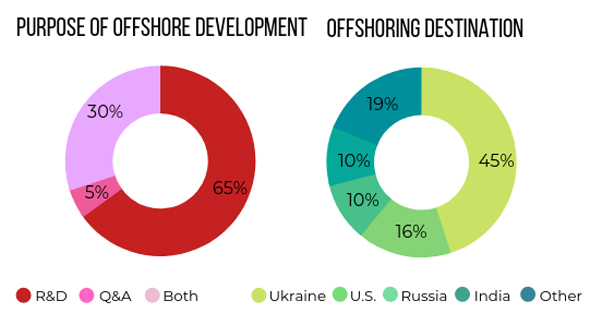 Currently, the report found, many Israeli tech firms address the shortage of talent by offshoring

Offshoring jobs “is a natural reaction to the problem of employee shortage,” Aharon Aharon, IIA’s director, said in an interview with Calcalist Thursday. While it poses a possible way to address a talent crunch, offshoring job does not best serve the Israeli economy, Aharon added. Before joining the public sector, Aharon managed Apple’s research and development operation in Israel.

The tech sector is the source of approximately 25% of Israel’s income tax, and the country puts a lot of efforts into bringing more people to the industry by subsidizing relevant educational programs. Despite these programs, the percentage of Israel’s tech workers out of the total workforce is already high compared to other countries and has remained stagnant for years, accounting for a steady 8%. 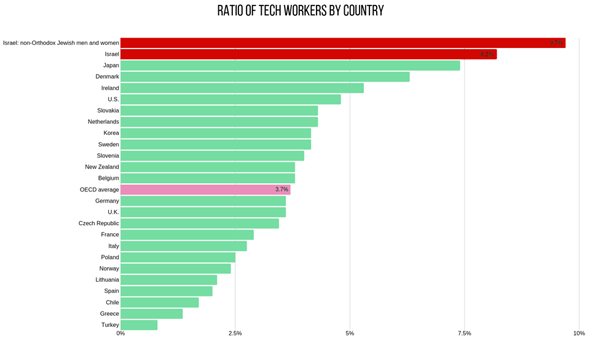 According to The Taub Institute report published Wednesday, Israel has one of the highest skill gaps between tech and non-tech workers. Having evaluated skill levels in literacy, numeracy, and technological problem solving, the report authors found that the average skill level among workers in Israel is lower than the OECD average, especially among Haredi and Arab Israeli workers. One of the main barriers is language skills and more specifically English-language skills.

In light of these findings, the report authors concluded that Israeli government spending on the tech sector has a limited effect on the Israeli economy.

“The data consistently show high levels of inequality in Israel, which stem from large differences between the abilities of graduates from various streams of Israel’s education system,” Avi Weiss, President of The Taub Center, said in a statement on Wednesday. “Therefore, providing incentives to retrain and move workers into the high-tech industry is not in and of itself an adequate response.”