TAGS:
Reports of Amazon’s imminent entrance into the Israeli market have sent the stocks of local operators of leading shopping malls plummeting on the Tel Aviv Stock Exchange by market close Tuesday. 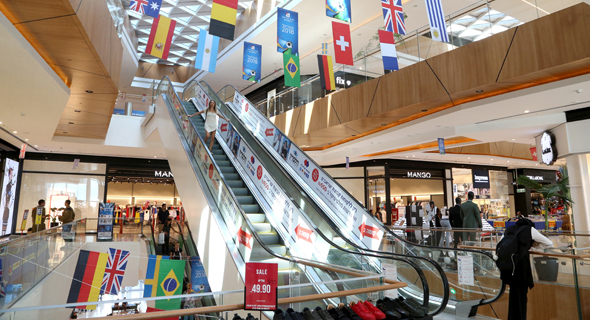 An Azrieli mall in Rishon LeZion. Photo: Zvika Tishler
On Tuesday morning, Israeli news site Ynet reported that Amazon has contacted Israeli merchants already active on its platform to begin marketing their products to local customers. Israeli consumers are doing more of their shopping online. In 2018, Israel Postal Company Ltd. delivered over 65 million packages weighing a total of 14.1 tonnes from outside the country, representing a 6.6% rise in the number of packages and a 22% rise in weight compared to 2017, according to data released by the state-owned company in January. Amazon currently delivers to Israel through the country’s postal service, mainly from warehouses in the U.S. and Europe. In June 2018, Calcalist reported that Amazon is in talks with an Israeli delivery company regarding the possibility of outsourcing its local deliveries.

Despite Amazon’s looming entrance and the potentially negative impact it holds for some local brick and mortar retailers, Ronen Menahem, a chief analyst at Israel’s Bank Mizrahi Tefahot, is unconcerned. It is important to remember that the initial impact on the stocks may be negative but the long term economic effect will likely be less dramatic, Menahem said in a phone interview with Calcalist Tuesday.

The companies that currently operate malls have been aware of Amazon’s interest in the market for two years and are working to extend their reach to new industries other than retail where Amazon has no foothold, Menahem said. These new fields include office real-estate, catering, and entertainment complexes, he added.

Earlier this month, BIG announced it has acquired a 50% stake in an 8,600 square-meter lot in Belgrade, intended for the construction of a 34,000-square-meter office building.

Related stories:
“The volume of malls and retail within these companies’ business models is gradually shrinking and will continue to do so in the future,” Menahem said. One of the main concerns in the industry is that Amazon’s entrance will expand the e-commerce market and bring prices down, Menahem said. Since many local brands already operate online shops and international brands are unlikely to forgo their presence in malls, Menahem believes these aspects would likely be less significant.
Cancel Send
To all comments
Recently Read