TAGS:
The ever-increasing demand for tech talent in Israel—and the continuous rise in salaries that inevitably follows—is pushing startups to look for creative solutions for their human resource woes. Lately, they have been looking to high schoolers. Calcalist has recently learned of several early stage startups that have started hiring students majoring in cyber or computer studies as minimum wage employees.

These high school students are gradually taking the place of the previous favorite targets of tech HR personnel: recent graduates of the Israeli military's intelligence and cyber units. Five years ago, fresh talent straight out of mandatory Israel Defense Force service would have set a startup back by NIS 20,000-NIS 25,000 (around $5,560-$7,000) a month. Today, they are commanding monthly wages of NIS 30,000 (around $8,400) or more. In Israel's current tech hierarchy, only established startups that have already raised a few tens of millions of dollars can afford such salaries. 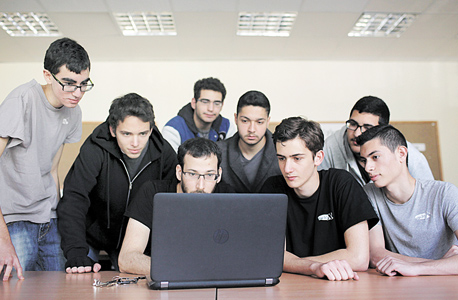 Cyber students, Ramat Gan. Photo: Amit Sha'al
At the head of the pyramid are the research and development centers of giant multinationals such as Google, Amazon, and Facebook, which have seriously unbalanced the local market in recent years with the resources at their disposal. A senior executive at a mid-size Israeli tech company, speaking to Calcalist on condition of anonymity, recounted an offer one of her employees received from Google: the rival contract, she said, offered to double that employee's salary, from NIS 40,000 ($11,100) a month to NIS 80,000 ($22,200). While such salaries are still an outliner reserved for top talent, "regular" monthly wages of NIS 40,000-NIS 50,000 ($11,000-$14,000) would still burn much too quickly through the modest funds of early stage startups. Some of the young startups interviewed for this piece have said that high schoolers command, at least initially, the minimum monthly wage of NIS 5,300 (almost $1,500). If they don't enlist immediately but rather defer their draft in order to attend university prior to service, their monthly salary can jump to around NIS 15,000 ($4,170). "The more we interviewed candidates and heard their salary expectations, the more we understood that we couldn't carry those expenses," Mirit Kagarlitsky, co-founder and CEO of cybersecurity startup Wenspire Ltd., told Calcalist in a recent interview. Wenspire, which develops application programming interface (API) security and analytics products, was founded in 2018. "We started to understand we needed to think outside the box," Kagarlitsky said. A high school near her residence in Ramat Gan, a town adjacent to Tel Aviv, offered its students the opportunity to major in cyber. Study concentrations like this one cater to teenagers who want to learn how to code. "We interviewed a few seniors and recruited them, and it proved successful," she said. "Their work is of higher quality than some BSc graduates." High schoolers are good employees mostly for short-term projects that can be completed by the time they enlist, Kagarlitsky said. One such student spent his five months of employment programming a demonstration of the company's system. Since she has first thought of the tactic, the idea has spread, Kagarlitsky said, and now both she and other entrepreneurs around her are being actively approached by students and parents for potential employment opportunities. Other startups, jaded by expensive IDF veterans, have also set their sights on high schoolers. Alongside young companies like Wenspire, more mature startups operating in the cybersecurity domain—where the talent crunch is especially dire—have begun tapping high schoolers. Among those who confirmed teen employment on record are XM Cyber, a cybersecurity startup co-founded in 2016 by retired Mossad Director Tamir Pardo; Tel Aviv-based virtual container security startup Aqua Security Software Ltd., founded in 2015, which had already raised over $100 million in equity; and computer and network security startup Cympire Ltd., founded in 2017.

According to a recent report prepared by Tel Aviv-based research firm IVC Research Center Ltd. for the Israel National Cyber Directorate, the country’s cyber sector alone suffers a deficiency of around 800 employees. The majority of managers interviewed by IVC, 90%, named employee recruitment as their biggest difficulty and the largest barrier to growth.

According to the report, half of the cyber startups currently active in Israel—367—were founded in the past five years. New startups in the domain are being established at a staggering rate, leading founders to sometimes settle for lower quality employees, the report's authors wrote. Job-hopping is already prevalent in the tech industry, Kagarlitsky said, meaning the short employment potential of high schoolers does not pose a significant problem, though of course, most startups would prefer their young employees defer their army service and continue working throughout their academic studies. It is a win-win situation, she said: the students receive a chance to gain real-world experience on development projects, while startups receive coders that absorb knowledge at an astronomical rate and are incredibly motivated. While so far only a few dozen startups have jumped on the bandwagon, local early stage venture funds are already aware of the trend. In every startup, the founders and key employees draw high salaries and that is okay, Arik Kleinstein, co-founder and managing partner at Glilot Capital Partners, told Calcalist in an interview. "The problem begins when you need a few dozen base level programmers," he explained. "That is when expenses start to pile up, and you need to find solutions to conserve your capital." Another high school talent pool, one that has existed for longer, is coding competitions, Kleinstein said. Winners at competitions such as Code Guru often receive job offers from tech companies—at higher salaries than just the minimum wage.
Related stories:
Even taking into account the number of startups that shut down each year, around 500 new startups open in Israel annually, according to general IVC data. At the same time, the number of relevant military and university graduates entering the job market each year has stayed mostly the same, leading to increasing difficulty in recruiting not just research and development talent but also customer support and marketing personnel, and employees specializing in simulations and network architecture. The managers surveyed for IVC’s cyber report place the average recruitment time for positions at six to eight months. Others solve the cyber talent crunch by providing on-job training. More mature companies, meanwhile, are turning to another solution: looking outside Israel and setting up research and development centers in eastern Europe, mostly Ukraine, or turning to acquihiring, the process of acquiring startups not for their technology—but for their employees.
Cancel Send
To all comments