Christiana Figueres, who led the negotiations of the Paris Agreement, believes Israel should strive more to produce renewable energy and rely less on the import of fossil fuels

TAGS:
Israel's approach to renewable energy is suicidal, Christiana Figueres, the former Executive Secretary of the U.N. Framework Convention on Climate Change (UNFCCC), said in an interview with Calcalist in May.

"As a country in such a fragile region of the world, you would think that Israel would very quickly move towards energy independence, and towards being able to produce 100% of its own electricity and then move towards electric transportation so that it can be politically and economically independent of fossil fuel exporting countries," Figueres said. “It does not make sense to me that Israel depends on fossil fuel exporting countries, it's suicidal.” 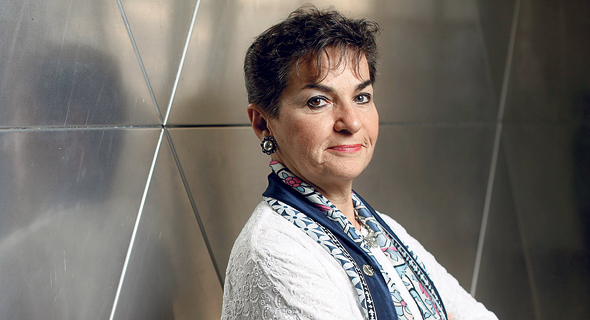 Christiana Figueres. Photo: Amit Sha'al
The cost of producing solar energy is close to that of fossil fuels, according to Figueres, who previously led the negotiations of the Paris Agreement, which entered into force on 4 November 2016. A situation in which countries refuse to export fuel to Israel is not unlikely, so the country should really strive to produce more of its own energy, Figueres said. Israel can reach at least 70% independence, if not 100%, she said. While there is some sustainable and solar energy being produced in Israel, the country is capable of producing substantially more, Figueres said. In 2009, Israel set a target of achieving 5% green electricity by 2014, and 10% by 2020. As of May 2019, it is behind on its goal, barely scraping by at 6.5%. “If there is a state with sun, it is Israel,” she said.
Related stories:
As a general rule of thumb, all governments need to provide sustainable energy incentives and to work towards better public transportation and power-based transportation that uses clean energy sources, Figueres said.
Cancel Send
To all comments
Buzz