Regulators around the world who attempt to limit the shared micro-mobility industry have accidents in mind, but what they should really be keeping their eyes on is how companies use and safeguard the private user data they collect

Studies show that even more than your school or community, your daily commute can be an indication of future success, or the lack thereof. A bad commute can relegate you to a poor socioeconomic status, and, for many, the last mile is the hardest and worst part of the journey.

The last mile has long been an impediment to optimal use of public transport systems, where convenience is often traded off for efficiency. However, without making transit easily accessible, use of public transportation falls, resulting in even less convenient service and higher fares. Worse public transit means more people choosing private cars, which further clog the congested roads, making the commute even worse for the rest of us. 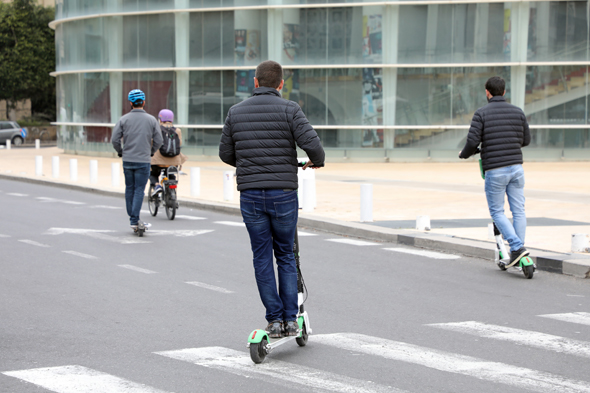 In the past couple of years, many new devices and services have tried to fill that mile. In Tel Aviv, as in many municipalities around the world, some of the most commonly employed technologies to provide cheap, efficient and convenient transportation—especially to and from the train and bus stations— have been electric scooters.

Shared e-scooter services, in particular, have become plentiful and readily available seemingly overnight, accessible effectively to anyone with a smartphone and a credit card. Although still in its infancy, studies suggest that the micro-mobility industry—which includes e-scooter, electric bike, and bicycle pay-per-use services—will continue to grow to a market of hundreds of billions of dollars, annually, in the U.S. alone.

Yet with all their promise, dockless e-scooters, the increasingly common variety that can be simply deposited anywhere at the end of a trip, have become the bane of cities, especially pedestrians, with scooters perilously strewn about the sidewalks, often in various states of disrepair.

As a result, there is increasing hate for e-scooters by non-users in many municipalities. In San Francisco, the animosity against these devices has risen to such a degree that e-scooters are thrown into trees, tossed into the bay, or even smeared in feces. There is even an Instagram account with over 100,000 followers, dedicated to photos and videos of people destroying scooters.

This is not to say that there are no positive sentiments towards these systems. Impact surveys, albeit often conducted by the rental companies themselves, show the many positive externalities of e-scooter sharing systems including increased mobility particularly for those demographics that cannot afford the alternatives or that are further situated from public transportation. Increased e-scooter usage also results in reduced greenhouse gas emissions from supposedly fewer cars, taxis, and ridesharing vehicles on the roads, and purported health benefits for those forgoing other forms of transportation, or simply going outside. Also, many of the scooter rental companies have reached out to the gig economy community, paying a network of people to fix, repair, and charge scooters with low batteries.

But even with scooters everywhere, the laws and regulations have been slow to deal with micro-mobility devices. In some countries, national laws do not consider e-scooters to be regulated motor vehicles at all and leave it up to each municipality to deal independently with the phenomena. In some cities, scooters regulations are implemented either via city-wide ordinances, through bilateral agreements, or through limited permits issued to specific companies, many of which require the signing of indemnification agreements to limit the liability of the cities. Another approach taken by cities is the temporary pilot basis, also known as the wait and see approach.

A more stringent strategy, like that recently adopted by the mayor of Nashville, Tennessee, drove some municipalities to simply ban e-scooters outright, while others have instituted rules that limit e-scooters to certain areas, times, and age groups, or require safety equipment to be worn by users.

In June, Tel Aviv, which reportedly has one of the highest mobility sharing rates in the world, published its own regulations. The new rules took effect at the beginning of August, limiting the number of e-scooters per operator and constraining where they are legally allowed to be parked. E-scooters that fail to abide by the rules may be confiscated by the city. Tel Aviv also demanded that the companies share relevant data with the city and required them to provide scooters for rent in all areas, including less well-off areas, such as Jaffa.

Congested cities like Tel Aviv, with their desperate need for alternative means of transportation, tread a fine line when they introduce regulations like these, as they may also disincentivize smaller and local companies from entering the market.

Without legal certainty in the form of concrete and uniform regulations, e-scooter sharing companies have to include clauses in their contracts to answer to any unexpected change, with many of them trying to absolve themselves entirely of any liability. To some degree, much of this legal contracting is justified: with their relatively fast speeds, quiet operation, and novice riders, e-scooter accidents involving third parties such as pedestrians, bikes, and cars, are common, and users are not necessarily insured.

Moreover, with their high center of gravity, bumps, and dips that are easily traversed by their e-bike cousins become dangerous death traps for e-scooters. Dedicated bike lanes, while a godsend for cyclists in congested cities, are even more dangerous for e-scooters that have to navigate around the faster and larger bikes. This is exacerbated by a reality in which many scooter users are under-aged, and most do not wear safety equipment.

A small part of this failure to abide by safety regulations may be specifically due to the e-scooter rental contracting process. Many hapless e-scooter riders are clueless with regard to all of the legal requirements of their rides, as user agreement contracts are easily clicked through without ever actually reading all the terms and conditions.

But perhaps you should read them. Buried deep in the contracts is something potentially as sinister as shattered bones, smashed e-scooters and shifting regulations: permission to collect the geolocation of every scooter and their associated users. Many of the larger e-scooter companies explicitly reserve the right to monetize their customers' data, which includes things like point of origin, destination and duration of the ride. Some e-scooter companies even record scooter wobble, which could be indicative of inebriation. This collection of data raises significant privacy and security concerns for every user and their families.

As I outlined in a previous article, even when de-identified and anonymized, all of this data, when aggregated over time, can be used to extract personal information, including home and work addresses, as well as preferred shopping and dining locations, houses of worship, and even membership in groups like Alcoholics Anonymous, veterans associations, or political bodies. In one example, the release of 2013 New York City Taxi data was sufficient to identify a number of individuals who frequented strip clubs.

Of course, there are community benefits to the collection of this data, particularly for municipalities—hence Tel Aviv’s data sharing demands—though not all companies are especially keen on sharing it.

With all of this sensitive information at their fingertips, it is unclear what level of security might be necessary for this e-scooter sharing companies. To this end, the Harvard Berkman Klein Center set up a list of guidelines specifically for municipalities that attempt to collect this data.

In the current reality, it is a given that data on our e-scooter rides will be collected. As such, if we are going to make the most of these rich data sets, there should be standards for data creation, sharing, retention, access, and reporting. There should also be efforts to optimize the quality and timeliness of the data and to develop ways to use the data to promote infrastructure optimization and equity, in addition to increasing safety amongst riders and pedestrians.

Unfortunately, there remain a number of the larger players that are against such standards that will make the data more useful for cities, and by extension, us. These companies have used their clout in some states to lobby for bills to prevent the use of the data. California Bill AB 1112 is one example. Under this proposed law, municipalities would be barred from dictating the size and location of micro-mobility fleets and from collecting individual trip data from users.

If scooters can relieve us from commuting hell, and data privacy, security, and usability can be improved, it might all be worth the various legal, privacy and safety tradeoffs. In the end, most of us are willing to put up with almost any indignity, provided it doesn’t block traffic.