The Problem With HOV Lanes

Earlier this month, Israel inaugurated its first HOV lanes. Now it remains to be seen what creative methods local drivers adopt to gain entry to this coveted road real estate

TAGS:
Even before they came into effect earlier this month, the new high occupancy vehicle (HOV) lanes on Israel's Highway 2 and Highway 20 snarled up traffic. Now in effect for over a week, they still drive commuters crazy, significantly increasing travel times, sometimes by over an hour. HOV lanes and other similar efforts to ration car usage are standard bureaucratic methods of implementing traffic polices. HOVs are used globally to varying success to reduce traffic congestion, curb pollution, and promote public transportation use. 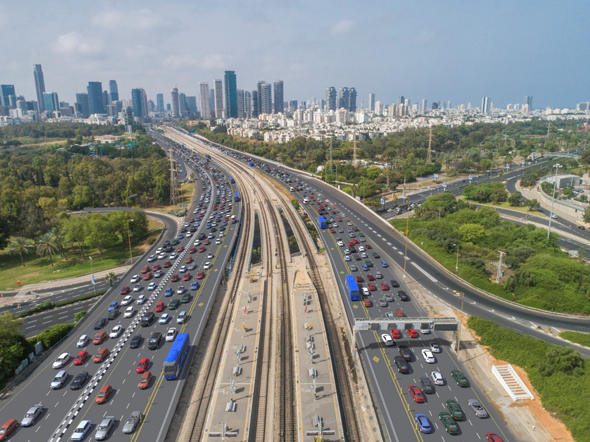 Israel's Ayalon Highway. Photo: Ayalon Highways
In the U.S., for example, there are hundreds of such lanes, some have been around for almost half a century. The oldest U.S. restricted traffic lane, a reversible restricted bus lane on the 17 miles long Shirley Highway in Northern Virginia, turned 50 just last month. In the U.S. Department of Transportation jargon, these HOV lanes fall under the broader category of Managed Lanes. These include many other traffic control systems, such as the high occupancy toll lane (HOT), a hybrid HOV lane that allows desperate lone drivers to buy access into the lane. Israelis may already recognize some of the other common systems, including dedicated bus lanes and Highway 1's Fast Lane, helping to connect Tel Aviv and Jerusalem. Managed lanes are only one of many methods for controlling traffic congestion. Other, more severe methods include limiting access to entire portions of a city or a road, depending on the day of the week, one's license plate, or the type of vehicle. Earlier this month, New York City banned cars from one of its busiest streets. While different, all these systems share enforcement problems. Without a workable enforcement mechanism, they can actually reward those who cheat the system. Enforcement need not be expensive or complicated: In some places, enforcement can be as cheap and straightforward as a toll-free hotline to report lane cheaters. In California, a pilot program tested a handful of hi-tech methods that combined surveillance cameras, infrared or laser technology, and AI to catch cheaters. Other technologies that have been considered employ apps that either photograph the occupants in the car, or count the number of smartphone signals in a vehicle (some are even smart enough to know if the same user owns two phones). Lane cheaters will always try to gain access to coveted HOV lanes, the more cheaters, the less useful the lanes become, and as such, many of these technologies are necessary evils that raise all sorts of security and privacy red flags. For many Israelis, there are already workable hi-tech and low-tech solutions for adding passengers to their daily commute to procure access to the new HOV lanes, from apps like Waze and Moovit, which allow users to charge passengers for rides, to picking up hitchhikers.

Nevertheless, for many commuters, these options are neither feasible nor desired, and as such, the new HOV lanes have brought on a rash of gripes and complaints, including the seemingly irrational decision to put the lanes on the right side of the highways with the associated constant merging of traffic, rather than the more logical left. For example, in Ontario Canada, it's simply a given that the HOV lanes will be on the left.

In general, there are long-standing concerns about the stated usefulness of HOV lanes in reducing congestion and pollution by incentivizing people to carpool. Data seems to be inconclusive as to their effectiveness, and results may vary or be dependent on a myriad of demographic factors.

But even proponents of HOV lanes can agree that commodifying the valuable road real estate by allowing single-passenger vehicles to purchase access to the lanes defeats the purpose. Others call to question the impact of allowing non-licensed passengers as well as children and infants to count toward the occupancy number, as their travel in the car is not offsetting the number of vehicles on the road.

In some instances, the introduction of HOV lanes might even incentivize parents to drag along uncooperative children who may have otherwise stayed at home, simply to provide the necessary body count. In worst-case scenarios, they can create perverse incentives for problematic behaviors, including the horrific renting out of drugged infants as additional passengers.

Not all people are that desperate, but there have been a number of creative attempts to circumvent restricted access into these lanes. Amazon, at one point, sold Carpool Kenny, billed as the "perfect inflatable passenger for the HOV lane." Many commuters have devised their own dummy solutions to the problem, with varying levels of panache. But cops are cracking down on these too. In response to the increasing amount of dummy passengers, Washington State passed a law that will specifically increase the fine for these inventive scofflaws.  Necessity is the mother of invention, and as such, there have also been a number of fascinating legal attempts to circumvent HOV restrictions. Arizona recognizes the personhood of a fetus to the extent that abortions are exceedingly difficult to obtain. However, a woman who attempted to circumvent the HOV restrictions by saying she was pregnant failed to have the authorities recognize her unborn child as a second passenger.  In a similar test of the extent to which the law grants personhood, a driver in California argued that having the articles of incorporation of his company in the passenger seat counted as the necessary additional person. In the U.S., in particular, corporations have been increasingly granted the trappings of legal personhood, including the right for free speech and the right to practice their religion. And while the California Vehicle Code itself even explicitly includes corporations within the definition of a person, the enterprising motorist still had to pay his ticket and was later denied an appeal.

The definition of personhood is seemingly so narrow in HOV cases that even dead people are not considered people, at least in Nevada, where a hearse driver was fined for transporting a body on the HOV lane.

No matter the law, however, cheaters will continue to attempt to circumvent the system as enforcement is often lax. To many, the statistical likelihood of a fine spread over numerous cheating attempts makes it economically sound. Some have even argued that under the right conditions, given the inherent inefficiencies of HOV lanes, cheaters may even help traffic flow.

Finally, with all the legal chatter about personhood for AIs and human-like robots, it is only a matter of time before someone tries to pass off a robot as a passenger. In contrast to a fetus or a corporation, a robot takes up room in the car and reduces the number of cars on the road. Moreover, like Marvin the paranoid robot from Douglas Adams' book The Hitchhikers' Guide to the Galaxy, AI technologies are increasingly incorporating, by design or otherwise, human-like characteristics. Perhaps having IBM's Debater as a passenger could even be useful in convincing the cop to tear up the ticket.