The biggest boost to Israel’s economy in 2019 came from new car purchases, but these are also the main inhibitors of economic growth, due to the loss of work hours caused by traffic jams

At first glance, it seems like great news for the Israeli economy. A closer inspection, however, reveals that this quarterly success is based on one parameter only: new car purchases. Israel's economic growth is dependent on and fluctuates according to local car buying. Its effects extend beyond private expenditure, as car purchases made by leasing companies also count towards quarterly investments.

There is a clear correlation between car sales and the Israeli economy, and there's the rub. The greatest growth generator of the Israeli economy is also the main obstacle of economic growth—the endless traffic jams that decimate millions of work hours for the Israeli workforce. All research conducted by the Bank of Israel, the Israeli Ministry of Finance, and the OECD points to one conclusion: Israel's traffic density is one of the worst inhibitors to its economic productivity and growth. 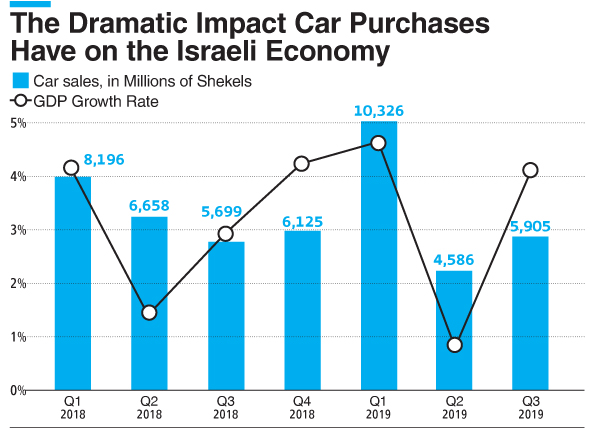 The Dramatic Impact Car Purchases Have on the Israeli Economy

Neutralizing the influence of car purchases, the picture that remains is not all that favorable. Private consumption expenditure accounts for around 60% of Israel’s GDP, but it increased by only 2.8% in the third quarter, equaling a 0.8% increase in private consumption per capita. How is it that car acquisitions jumped significantly but private consumption did not? Because people cut expenses elsewhere. Acquisition of household appliances such as refrigerators and washing machines dropped 15.1%. Furnishing and jewelry expenses dropped 3.6%.

Expenses on household needs such as rent, water, gas, electricity, food, and services increased by only 0.8%. Expenses on semi durable goods such as clothing and footwear dropped by 10%. Without car buying expenses, private consumption would have dropped this quarter, not increased, and that is a very worrying sign.

The plateauing of private consumption is just the first in a list of bad news for the Israeli economy. Investment in fixed assets dropped 6% in the third quarter, after dropping 5% in the second quarter. This is one of the most important parameters when considering long-term economic growth and it seems Israel's business sector is not building or renovating, nor is it buying equipment and machinery. The report offers another bit of troubling data: when excluding diamonds and early stage startup companies, both of which draw in much money but make a low net contribution overall, Israeli export of goods and services dropped 4% in the third quarter of 2019. That equals a 7.4% drop in industrial export without diamonds.

Aside from car sales—which are also heading towards a slowdown—there is another parameter that contributes to economic growth but could take a heavy hit soon: public consumption, which grew by 4%. Over the past two years, the government budget and expenditure grew fast. But the end is both known and near here as well. An enormous government deficit of 3.8%, which has already surpassed the legal threshold by NIS 14 billion ($4.04 billion), and will necessitate budget cuts and tax raises. That specific growth engine will therefore also reduce its contributions once a new government is formed.

The Bank of Israel, the finance ministry, the International Monetary Fund, and the OECD are therefore all in accord: Israel's annual growth for 2019 will slow down to only 3%. Current estimates for 2020 will be updated, downwards. And as long as Israel remains in a political statement and with an interim government, those problems will not be addressed.