All Israelis returning from China will be subject to a two-week quarantine at home, under the Israeli Health Ministry’s supervision

TAGS:
Israelis returning from China will be quarantined for a two-week period. Israeli Prime Minister Benjamin Netanyahu has agreed to a demand made by the Israeli Ministry of Health to reimburse Israelis who will be forced into a 14-day quarantine if suspected of contracting coronavirus, according to one person familiar with the matter who spoke to Calcalist on condition of anonymity. Netanyahu agreed in principle to the measure in a meeting with health ministry officials Sunday, the person said.

The Israeli health ministry has taken several steps to limit the spread of the virus, should it cross Israeli borders. All flight routes between Israel and China have been shut down, and the entrance of Chinese citizens to Israel has been temporarily forbidden. Israeli citizens who return from China are required to remain inside their homes for the duration of the quarantine and could face criminal charges if they fail to comply. According to the person familiar with the matter, the ministry intends to appoint supervisors to make sure those secluded will not leave their homes. 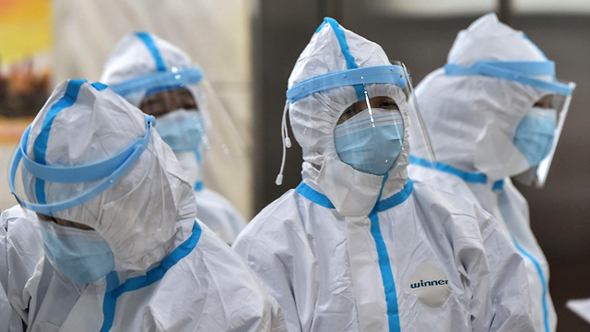 Coronavirus, China. Photo: AFP
As the threat of the coronavirus spreads worldwide, Australia has announced its intention to set up a dedicated quarantine facility, and the U.S. has considered doing the same. The Israeli health ministry has considered erecting a dedicated quarantine facility, but eventually ruled it out, saying such a facility will be less efficient than home quarantine and could run a greater risk of spreading the infection to healthy people, the person said. One of the reimbursement schemes currently being considered is paying quarantined people half the average monthly wage, which stood at NIS 10,500 (approximately $3,040) at the end of 2019. If, for example, 5,000 Israelis will be forced into a two-week quarantine, that means an expense of NIS 26.3 million (approximately $7.6 million). The ministry is also considering enabling essential Chinese personnel involved in Israeli infrastructure projects, or other projects of national importance, to enter the country and submit to a 14-day quarantine, same as Israeli citizens returning from China. It is already apparent that the events in China, and to a lesser degree Hong Kong, will have a direct effect on the Israeli economy, mostly due to their impact on trade in goods and services. An analysis of the international trade data supplied by the Israeli Bureau of Statistics (CBS) reveals that tech export and the diamond sector are both posed to suffer a direct hit as a result of the spread of the coronavirus. Israeli consumers are expected to experience a temporary shortage of electric equipment, cameras, smartphones, and textiles imported from the two territories. According to CBS data, export of goods to China and Hong Kong accounts for 11% of all Israeli goods exports, 13% if the diamond sector is included. It reached $7.7 billion in 2019, a 15% drop from 2018 caused by the U.S.-China trade war but similar to the export levels seen in 2016-2017. Services export adds another $1 billion, while Chinese tourism to Israel also does its share; overall, export to China in 2019 amounted to around $9 billion. A closer look reveals that Israel’s tech sector will see the most damage: 98.6% of Israeli goods export to China and Hong Kong is industrial, with computer manufacturing, electronic, and optical devices accounting for 70.3%, or around $3.5 billion.
Related stories:
But those are just the direct impacts—as China is the biggest global exporter, selling some $2.5 trillion worth of product annually, the entire global supply chain is set to experience disruption, and the Israeli economy is likely to experience those shockwaves as well. Import from China to Israel reached $8.2 billion in 2019, 11.3% of all imports to the country. Chen Lichtenstein, president and CEO of Israeli pesticide manufacturer Adama Agricultural Solutions, which is a subsidiary of chemicals company China National Chemical Corporation, also known as ChemChina, told Calcalist that companies operating in China could absorb a few weeks of inactivity, but anything over a month could start hurting global supply chains. “Even if some of the companies resume operations, the main issue today is moving the stock, because some of the roads and ports are closed,” he said.