A phenomenon unique to Germany, Mittelstand companies are commonly defined as small to medium private companies with up to 50 million euros in annual revenue and less than 500 employees 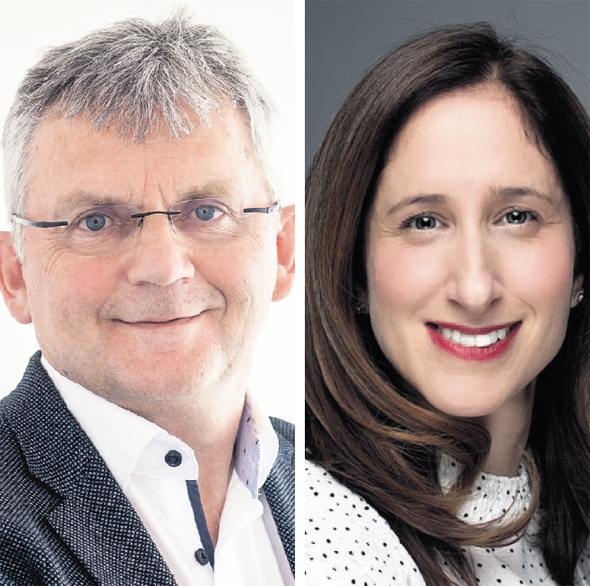 STARTPLATZ's Lorenz Graef (left) and Israel Trade Center's Ofira Engelberg. Photo: STARTPLATZ, Boaz Arad
Historically, the number of Mittelstand companies in Germany is higher than that of small and medium companies in other countries. Between 95% and 99% of German companies, or 3.7 million businesses, are defined as Mittelstand companies, and nearly 60% of German workers are employed by them. One of the unique characteristics of Mittelstand companies is that even though they are not well known by the public, they often dominate a certain industrial niche completely, in both the German and international markets. These niche-dominant companies are called hidden champions when at least 40% of their sales are made outside of Germany and they are either the biggest or the second biggest companies in their limited field. According to data from BVMW, an association of Mittelstand businesses, out of 2,700 hidden champions in the world, around 1,300 are German. As global competition intensified, many traditional Mittelstand companies realized they had to adjust to the changing world in order to remain significant players. “The ‘if it’s not broken why fix it’ approach is not going to cut it anymore,” Andreas Widl, CEO of valves company Samson AG, said in a recent interview with Calcalist. “It is true that German companies have very high quality standards, but China also has very good engineers and lower production costs, so Mittelstand companies must learn how to become more efficient and advance towards the new world,” he said. If you consider global warming, for example, auto part companies have known for years that they cannot base their business model solely on petrol operated vehicles, but are only now waking up to realize they have to change, he added. Now, many Mittelstand companies want to invest in innovation but do not know where to begin. Ofira Engelberg, an executive of marketing and business development at Israel's Ministry of Economy's Foreign Trade Administration’s Israel Trade Center in Berlin. We could feel Mittelstand companies are opening up to innovation so we were looking for a way to connect them with Israeli startups, Engelberg said in an interview. “The problem was that these are all private companies that do not post filings and there is no single body that represents them, she said. These companies are hard to reach, partly because they are spread all over Germany, she added. Engelberg then decided to partner with STARTPLATZ, an innovation center based in Cologne and Dusseldorf and servicing the state of North Rhine-Westphalia (NRW) in Germany’s west. Together, the Israel Trade Center and STARTPLATZ formed the Startupnation to Mittelstand project. Last fall, the project held a week-long seminar in Dusseldorf in which 10 selected Israeli startups participated alongside dozens of Mittelstand companies. The event included technology pitches and one-on-one meetings between the companies, which led to at least one collaboration agreement for every startup. A substantial portion of the seminar was dedicated to an educational program covering the cultural gaps between Israel and Germany and the different approaches each country has to doing business. Since Israeli companies are accustomed to the American market, they tend to be very aggressive, Alon Brandman, the project’s managing director said in an interview. “I have seen more than once how after a successful meeting between an Israeli startup and a Mittelstand company, the people on the Israeli side send multiple followup emails and do not understand why the Germans are not answering,” he said. This type of business pressure just isn’t compatible with the German lifestyle, in which people do not take their work home with them and the inbox stays in the office, he explained. STARTPLATZ’s founder, Lorenz Graef, advises Israeli startups to be more patient. German customers do not want to be swept off their feet, it takes time and several meetings to build actual trust, but once it is there, if the product is good enough, there will be a long and stable collaboration, Graef said. Industry 4.0 startup 3DSignals Ltd., which develops sensors for the digitalization of factories, is collaborating with several Mittelstand companies, including Samson. Danya Golan, 3DSignals’ vice president of marketing, can confirm first hand the importance of patience when dealing with German companies. One client took several months to contact the company after a successful meeting in STARTPLATZ’s seminar, she said in an interview. These are factories that have been operating for over a century, they put quality first and their processes are long and it is different than an Israeli startup that can come up with a product and make it in two weeks, Golan said. Israeli voice recognition startup VocalZoom Ltd. also participated in Startupnation to Mittelstand’s seminar and has several Mittelstand companies as partners. When dealing with German clients you have to be very concrete, founder and CEO Tal Bakish said in an interview. You cannot use marketing tricks as they would prefer to settle for a less advanced product as long as it is substantial, he said. Bakish also said the seminar taught him about the different negotiation cultures between the countries. You cannot play hard to get, he said. “If you say you are not interested, a German client will just move on,” he said. “The most important thing is to have someone that speaks the language and knows the market, it’s the best money you can spend,” he added. Graef went even further and suggested companies open an extension in Germany, to help local clients feel more comfortable. It took time to bridge the gaps, Samson’s Andreas Widl said. “At first, our employees were unwilling to speak English and felt weird about having people walk around in flip flops and T-shirts,” he said. But, after two years of working towards a collective cause, things changed for the better. “In the end, if you look at ways to collaborate and see technology not as a threat but as an opportunity, there is great potential, he added.
Related stories:

Dusseldorf, Cologne, and other cities in NRW are currently working to draw in startups from Germany and around the world by offering financial support. NRW intends to invest around 640 million euros in future projects by 2021.