TAGS:
When Israel’s Tel Aviv was first swarmed with e-scooters in August 2018, the city had to adapt. The first micro-mobility solutions were presented by Bird, a U.S.-based e-scooter provider that aimed to change the way people moved around. Two years later, its scooters have served approximately 350,000 people.

“If you think about it in the context of 420,000 Tel Aviv residents, that’s impressive,” said Bird Israel CEO Yaniv Rivlin. “Almost every person has used a Bird.” 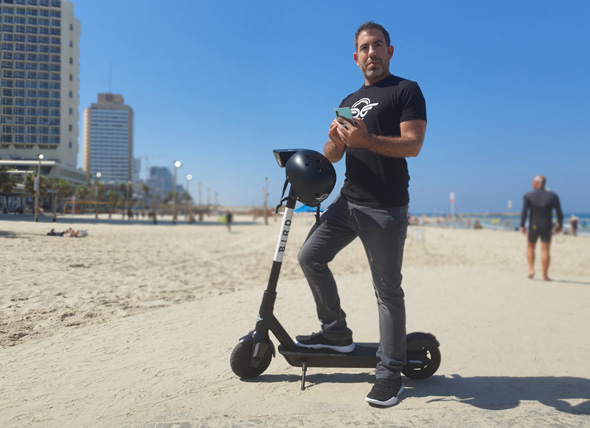 Yaniv Rivlin, CEO of Bird Israel Photo: PR
He’s not wrong. If you look around the city, you’ll be hard-pressed not to see Tel Avivians— many of them millennials—riding along the beach, or the boulevards, going to friends’ houses or beach parties. In two years, the micro-mobility market went from a disruptor to a part of everyday life. What’s most noteworthy is how companies like Bird work alongside city municipalities to coordinate better, and smarter, living for citizens in cities. The partnerships between companies like Bird and public officials can lead to better bike lanes, streamlined public transport routes, or assistance in large-scale events.

“Think of the docking bicycles,” Rivlin recalled, reminiscing about the distant past of 2017. “The amount of money the city paid for that bike scheme is insane. With us, the city is getting a great service, for basically free, in a way that provides another transportation alternative in your cities.”

The public sectors aren’t exactly known for innovation. Due to restricted budgets, bureaucratic paperwork, or ‘out of touch’ officials, it often rests on young, private entrepreneurs to bring in new technologies that can later be adopted on a wider scale through initiatives and partnerships.

One example of how Bird has helped the city of Tel Aviv alleviate some of its traffic problems was in 2019 when Israel was the official host of the Eurovision Song Contest. The local municipalities contacted companies like Bird and asked them to place their bikes in places where they anticipated high numbers of foot traffic.

“Because it’s dockless, we can adapt based on the demand,” Rivlin said. When 2020 faced worldwide lockdowns due to the coronavirus (Covid-19) pandemic, Bird saw a solution as the public sector shut down transport systems: offering free rides to healthcare professionals and helping doctors and medics serve sick people without relying on slow, bureaucratic decisions being made by those in public office. Suddenly, the private sector could jump in where the public sector couldn’t. The trend of micro-mobility isn’t going away, and cities are working alongside these private companies to help improve communication, transportation, and infrastructure. Currently, 11% of inner-city rides are conducted on micro-mobility solutions, and the number is expected to rise to 25% by 2025. This means more bike lanes, optimized cycle routes, and newly painted parking spots designed for shared scooters, not private vehicles. “Before we launched, there was a road tour to talk to people and one of the slides in my deck showed a parking spot that we created with a bunch of Birds in the spot,” Rivlin explained. “I said, ‘this could be the future: instead of one car we can have 15 people parking’.” Two years and 5.5 million rides later, Rivlin’s slide became a reality.