Vault AI has the technology to uncover Hollywood’s secret sauce

By analyzing more than 150,000 data points in a single script, the Israeli company can determine what shows and movies will be a success

It’s common knowledge by now that many of our favorite streaming services use the data they collect about us to give us more of what we want. Famously, the popular Netflix show House of Cards was devised simply because executives saw a neat Venn diagram of viewers that liked David Fincher-directed and Kevin Spacey-starred films. Eight years have gone by and now Vault AI is here to bring that level of accuracy to studios and marketing executives all across Hollywood.

Vault AI was founded by David Stiff, Ziv Ayalon, and Nir Tzachar. Stiff had expressed frustration with the movie business, and Ayalon and Tzachar had previously come from Final, a high-frequency trading (HFT) company that specializes in proprietary prediction. Together, they took their film passion and AI knowledge to determine what would make a film a hit. Using approximately 150,000 data points in scripts, Vault AI could determine the success of that script and measure the risk for studios who would invest time and money to make it. 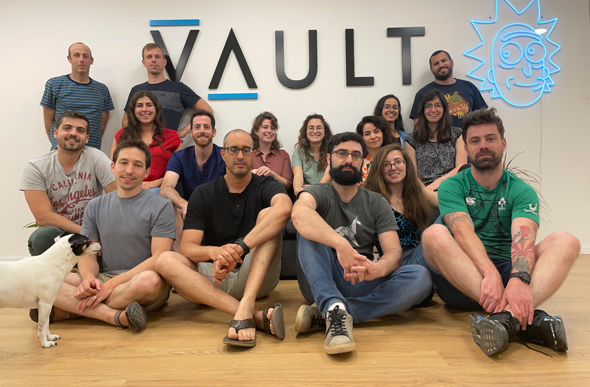 The Vault AI team, taking on Hollywood from Tel Aviv. Photo: Vault AI
Stiff, the company’s CEO based out of California, couldn’t share Vault AI’s clients, but assured that “if you saw a movie or TV series over the last few years, you’ve seen our work and haven’t even realized it.” The company has 10-15 clients globally who Stiff confirmed are “streamers, networks, and studios.” It effectively has two sides to its business. ‘AI Reporting’, whereby clients send a script and get a report back in a PDF that gives them their insights, and ‘Market Intelligence’, where they have data and creative data sets to discover the best way to distribute content. Each report costs roughly $20,000 a pop and takes anywhere between 12 hours and two days - much more effective than conventional surveys. “If you’re the head of research at a network and you need to know why Falcon and the Winter Soldier worked, the only way you could do that previously was by doing a focus group or survey to find out what it was,” Stiff said. “If you want to run a survey globally... this is months, old school Nielsen. You have to work with the clients, ask questions… Usually, it would take months to put together what we can do in a few days or hours.” Vault AI doesn’t intend to ‘replace’ or battle with creative minds in how content is inevitably created, but rather it sees itself as a tool for marketing departments and a disruptor to this Nielsen model of long and ineffective surveying. Today, the company has evolved to focus less on script analysis and more on the endpoints of film and mainly TV distribution - a studio might send four or five different cuts of a trailer for the same movie, and Vault AI will determine which one would get the most engagement - leading to more visits to the cinema on opening weekend. So what sells? With 150,000 different data points, Vault AI can determine the best elements for success, but it’s not as easy as placing Hollywood’s hottest actor in the trendiest town to defeat the bad guys. Due to the system being so “granular”, there is no clear indicator of what sells. “It’s hard to pinpoint what it is that really works,” Stiff said. “It’s not just ‘LA’, ‘Gun’, ‘Chris Pratt’ and you win. It’s everything down to the levels of sex and violence, even to the protagonist and his characteristics, where it’s shot, when it’s shot, the type of narrative structure they’re employing, whether it’s linear or not…” According to Stiff, there’s an obvious desire for superhero movies that have dominated box offices for the better part of a decade, but there are more escapist stories, like horror, currently attracting audiences and there’s been a steady increase in the stories being told by and about people of color. “We’re also seeing that IP is the biggest thing,” he added. “Taking a show or a movie and spinning it off in different universes, having your content across movies and streaming has become the thing people are going after.”
Related Stories:

The contentious relationship between executives and creative has always existed, and yet Vault AI could run the risk of truly interfering in the creative process if executives lean into data-driven decisions and neglect the creative visions of their artists. No data set would ever suggest that a four-hour movie would be a success, and yet Warner Brothers just released ‘The Snyder Cut’ of 2017’s panned Justice League to critical success (albeit maybe not a financial one).

“We found out pretty early that it’s a bit like stepping on creative toes a bit, but if you could do this well then it would be super powerful,” Stiff told CTech. Importantly, Vault AI should not be used as gospel but instead used to provide insights. “It’s a bit like Waze for content. We try to give them a great roadmap and they can take any journey they want. The data shows them if there’s a car crash ahead or what would happen if they take a different route.” In September last year, Vault AI started working on reality TV to help TV studios determine story elements that would help frame the episodes better or focus on more popular characters. Looking ahead, Vault AI is starting to analyze commercials and CPG products for advertising purposes. It’s also expanding efforts into analyzing podcasts and measuring their success were they to be adapted into a movie or television series. As time goes on, more content will be devised, tweaked, and distributed using the machine learning algorithms that predict technical success - hopefully without affecting the creative integrity of the artist. “Are the Martin Scorseses and Michael Bays and the Steven Speilbergs going to accept creative notes from an algorithm? Probably not,” Stiff admitted. “But they would love it if they used (Vault AI) to market because then their movies will be a success.”