The Israeli startup’s technology offers the same flavor, texture, and nutritional value as regular milk but without the animal

TAGS:
For those who wish to go dairy-free but hate the taste of black coffee, Imagindairy might just be your solution. The company has developed proprietary technology that recreates nature-identical, animal-free versions of whey and casein proteins that are found in milk. Now, Imagindairy can create true milk proteins that are indistinguishable from real milk via a natural process of precision fermentation. Amid a growing call to take action against the environmental burdens and animal welfare issues surrounding animal-based foods, Imaindairy is ‘leaving the cow out of the dairy equation’ and offering the same flavor, texture, functionality, and nutritional value of regular milk but without the animal. 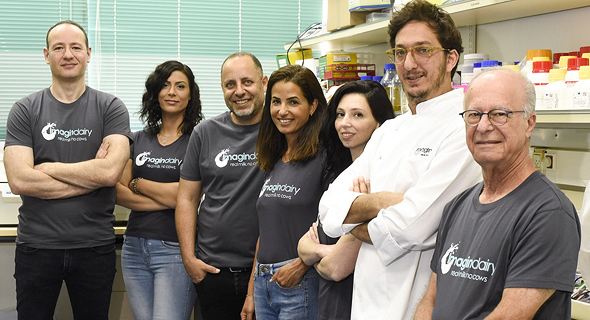 The Imagindairy Team. Photo: Rami Shlush
“Our vision was to deliver an animal-free version of the primary dairy proteins — whey and casein — that can allow product makers to match real dairy products in terms of protein concentration, nutrient profile, and the full sensory experiences of the animal-derived versions,” said Eyal Afergan, Ph.D., Co-founder and CEO of Imagindairy. “I look forward to being able to give my kids such treats as a cup of nutritious, tasty milk or creamy yogurt without the hard impact on animals or on the environment they must inherit.”

Imagindairy was co-founded by a team of experts from a range of industries, such as microbiology, computational system, and biotechnology with the support of The Kitchen FoodTech Hub based in Israel. The team is headed by Dr. Arie Abo, Ph.D., a specialist in protein biochemistry, in collaboration with Tamir Tuller, Ph.D., a professor at Tel Aviv University.

The company is based on 15 years of research by Tuller, Imagindairy’s co-founder and CSO. “We developed an advanced protein production platform that allows us to optimize every step in creating milk proteins. This allowed us to achieve the yield that is needed to achieve commercial production,” he said.

So far, Imagindairy has raised $1.5 million in Seed led by The Kitchen FoodTech hub, with contributions from the Israeli Innovation Authority, CPT Capital, New Crop Capital, and Entrée Capital, and will soon enter its A round funding series.