A popular and expected goal for Israeli companies is to penetrate markets outside their local country. As governments and organizations around the world come to terms with rising ransomware threats from foreign adversaries, Israeli cybersecurity companies are hoping to secure a top client: the U.S government.

“One of the questions we get a lot is ‘can an Israeli company even sell into the federal market’,” said Seth Spergel, Managing Partner at Merlin Ventures, a venture firm that helps cybersecurity companies accelerate their scale and help sell to the American federal market. “So many Israeli cyber companies come out of the military’s Unit 8200 and that’s the world they know, a lot of times we hear that companies want to go sell to the NSA or the CIA. That’s not the place that’s going to buy Israeli technology, at least not easily.” 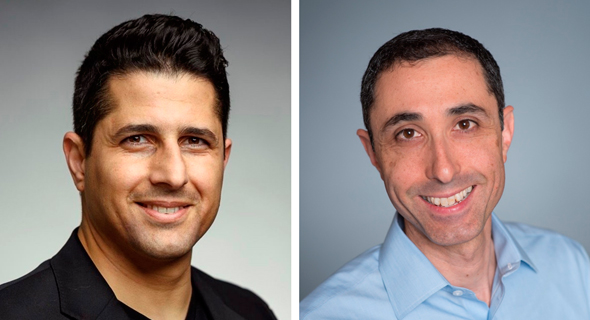 Shay Michel (left) and Seth Spergel. Photo: Almog Goldenberg
Recently, the U.S government has been hit by a string of cyberattacks allegedly committed by, or under the instruction of, the Russian government. In 2020 the U.S government was hit and earlier this year the Colonial Pipeline was hacked, cutting off gas for the east coast and ending with a $4.4 million payday for hackers. According to Spergel, governments are moving to the cloud and B2G is “not a bad word anymore”. Merlin is made up of three main areas that help companies prepare to sell for federal markets. Merlin Ventures, which helps with strategic investments in cybersecurity companies, Merlin Cyber, which helps them with their go-to-market strategies, and Merlin Labs, an internal organization that leverages engineering expertise and bringing the technologies together. “Merlin Ventures and Merlin Cyber are two different brothers of the same family,” he noted. While it’s not easy to convince some branches of the U.S government to adopt foreign technologies, it isn’t impossible. Federal markets looking at deploying Israeli cybersecurity solutions usually include more civilian-facing agencies such as the DHS, the VA, Health and Human Services, the Department of Labor, Housing Development, among others. Together with Shay Michel, the General Partner at Merlin Ventures who heads the Israel office, the firm helps Israeli firms earn market certifications, testing, and product enhancements in the hope to help the U.S government against future attacks. “With 8200 and with innovation in our DNAs, I think this is a special combination and this is the reason for the success (of the country),” Michel added. To date, Merlin Ventures has invested in seven federal-relevant emerging cybersecurity software companies. Typically, it will invest between $1-5 million at the Seed to Series B rounds in the U.S but also its allied nations, with a focus on Israel. Its portfolio includes Cyolo, Cynet, and wickr, an American company that was acquired by AWS last month.
Related Stories:

“We're generally speaking about looking at companies that will eventually have an impact on the federal industry and federal market,” Spergel continued. “It doesn’t mean we’re looking for companies trying to sell to federal on day one, by the time you’re ready to sell to federal you’re usually a pretty large company.”

For Israeli companies looking at penetrating the lucrative federal market, Spergel and Michel urge them to set up a presence in the region and make sure they’re ready for the long sales cycles that come with selling to bureaucratic institutions. It takes time, and Israelis should not run before they can walk. “These early-stage companies that we do invest in, or earlier stage companies we invest in, absolutely should not be spending their resources trying to tackle a federal market on day one,” Spergel warned. “It’s expensive and time-consuming and it has to be the kind of thing where you have enough other things going on as a company where you can survive that drought it’s going to take to get to those deals coming out of the federal market… You want to make sure you have that market recognition, you’ve got the sales force in the U.S that is big enough and mature enough that you can add someone who can really focus on the federal market and afford to have them sit through the federal sales cycle - which could easily be over a year before they see revenue coming through that.” Israeli companies always look at ways their innovative solutions, born usually from army service, can be widely used by places around the world. As Michel notes, Israel has “no gas, no gold, and no mining. Israel depends only on the mind of its people,” and yet they need guidance from firms like Merlin to assist in the specific needs unique to federal markets. “If you want to sell to the government, you need Americans with specialties to sell to the government,” Michel concluded. “It’s not as challenging as it used to be - it’s now easier than it used to be, and together with Merlin Cyber it is possible to make lots of money in the federal world,” he said.