“Amazon is developing something very cute… We are not in the cute industry,” says Unlimited Robotics

TAGS:
We keep being told that robots ‘won’t take our jobs’, and yet companies from Amazon to Boston Dynamics seem determined to put them in our offices and living rooms. As the eCommerce giant recently announced its personal robot Astro, CTech caught up with Israeli robotics company Unlimited Robotics to see progress being made in Startup Nation. “We're doing something really crazy here - we're trying to understand if any company in the world is doing something similar and except for the giants, we're not familiar with any company that does or is trying to do what we are trying to do,” explained the company’s co-founder and CEO Guy Altagar. 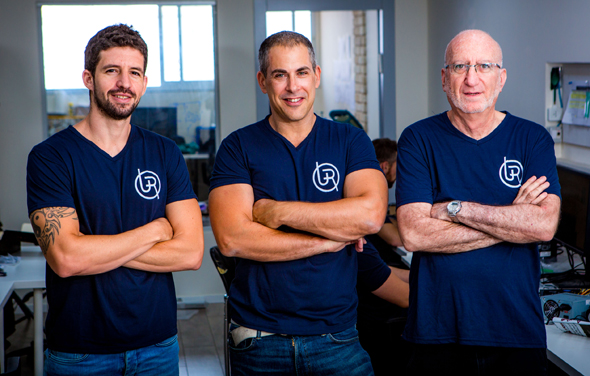 Left to right: Martin Gordon, Guy Altgar, and Eli Kolberg. Photo: Unlimited Robotics
Altagar introduced CTech to Gary - a robot ‘the size of a 10-year-old’ standing at 140 cm (4’5) and weighing 40kg (88lbs) - via video sent from their office. The robot is designed as a service robot intended to operate in our homes, restaurants, gyms, airports, elderly facilities, and practically anywhere that needs assistance. He is described by Altagar as a playground for software engineers and app developers who wish to create their own apps for robotics but don’t have the access to a physical arena. “We empower every software developer who writes their own code on JavaScript or Python, to continue writing their own code in their own languages but we do the translation into hardware,” Altagar explained. “That means we open the market for product developer apps to an enormous amount of developers that until today had faced an extreme challenge in developing different types of robot applications.” Altagar described Gary as a physical manifestation of Apple’s App Store or Google Play. Developers can create apps for specific services, such as loading the dishwasher, watering the plants, or opening a stiff jar, and launch them on Unlimited Robotics’ own app store. Users who then own a Gary can download the exact app they need and operate it through a portal provided by the company called UR App. Developers can decide to charge for their apps, and Unlimited Robotics will take a 30% cut.
Related Stories:

The robot learns each behavioral setting and environment to then communicate to other Garys and learn from individual experiences, similar to how Amazon Alexa speaks to her devices around the world.

“On one hand we created a platform which is a software to help Python and Java developers to continue to write their own code but open them up to the hardware world,” Altagar explained. “On the other end, we created an entire playground on the hardware side by building Gary.” It’s hard to imagine the person who would rush to invite Gary into their homes. He (she? it?) is a commanding presence and will fundamentally change how people live their lives. There is no shortage of privacy concerns surrounding companies placing cameras and microphones in our homes - not to mention the generational divides between the tech-savvy youth and those of advanced age who may not understand how to operate a robot, even though they’re the ones to benefit most from it. According to Altagar, around 80 people have already paid the $99 fee to reserve a spot on the company’s waiting list to receive the first generation of Gary in Spring 2022. After that, it will cost $5,900 in a one-off fee or in installments of $100 each. 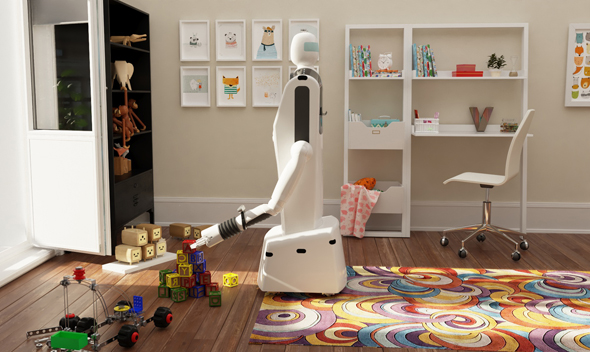 A look at Gary in action. Photo: Unlimited Robotics
“Who are those people? They’re early tech adopters of consumer electronics,” he continued. “Those people are the same people who bought Oculus when they released their first product. Those people are the people who purchased Tesla when it was almost a prototype. We do see those people by registering on the waiting list to get Gary.” Gary - who got its name from Altagar’s own children Gali, Rani, and Yaeli - will hopefully make his debut in places where the ‘experience of the consumer is mostly positive’ to help with customer comfort and adoption. Similar to how we all got acquainted with Alexa because of our techy friends, Gary will introduce himself in our public spaces as a service robot for anyone of any age.
Related Stories:

“Amazon is developing something very cute… We are not in the cute Industry. We are the functional, practical industry,” Altagar said. “The community of developers has tremendous knowledge and much bigger value than the most talented team in Amazon or Boston Dynamics. You can have 10 very smart engineers in Amazon, you can have 50 engineers in Boston Dynamics, but the power of the group of developers worldwide building and developing different applications and solving different types of problems and business logistic issues together as a community is much stronger than the smartest person at Amazon.”

Unlimited Robotics was founded by Altagar alongside Martin Gordon (CPO) and Dr. Eli Kolberg (CTO). The team is made up of 26 people, 22 in Israel with the others in Colombia and Georgia, and the company is seeking to finalize a $15 million round in Series A funding. Currently, it is operating off initial fundraising from investors, one of which is Avishai Abrahami, CEO of Wix, who also serves as a board member.