The company named 1E Therapeutics was founded by Dr. Ido Bachelet and has received investments from the likes of Marius Nacht. It employs dozens of scientists working on an unspecified project related to drug development

Israeli biotech company 1E Therapeutics has raised $120 million in a Seed funding round, Calcalist has learned. A round of such magnitude for an early-stage biotech company is extremely rare and it is believed that 1E’s Seed funding is the largest of its kind for an Israeli startup in the sector. Not much is known about 1E Therapeutics, but it is believed to be active in drug development.

Calcalist has also learned that one of the major investors in the company is serial entrepreneur Marius Nacht, one of the co-founders of Check Point who is currently considered to be the most notable Israeli investor active in the biotech and medtech sectors. 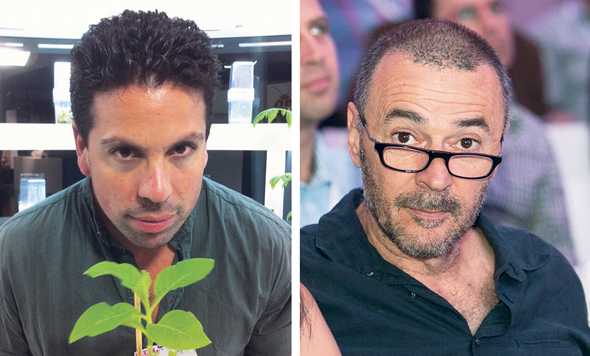 Marius Nacht (right) and Dr. Ido Bachelet. Photo: Orel Cohen
According to the Israel Register of Companies, 1E Therapeutics was only registered as a company on July 11, 2021. The company, which already employs dozens of researchers and is in the middle of expanding its team, has hired a floor of offices and laboratories in the Rehovot Science Park. The only thing disclosing the company’s activity in the building is a basic sign produced on a home printer hanging at the entrance to its offices. Employees at the Science Park told Calcalist that the labs built by 1E over recent months rival those of big established companies. “I have never seen such a collection of advanced equipment in one lab, not in the industry or in the academy,” a person who has been in the 1E offices told Calcalist. “I estimate that the cost of the equipment alone came to tens of millions of dollars.” 1E doesn’t even operate a full website, currently only having a single page at www.1etx.com in which it provides a short description of the company’s activity and an email through which to make contact. 1E Therapeutics writes on its website that it “is a breakthrough drug development company creating first-in-class RNA-targeting therapeutics based on a proprietary drug design platform.” It adds that 1E's “groundbreaking process has proven uniquely able to develop innovative drugs that address chronic life-threatening indications as well as emerging and evolving pathogens. 1E already has lead compounds that address a wide array of indications in oncology, age-related diseases, immunology, anti-microbial resistance, viral infections, and orphan neurological disorders.”
Related articles:
1E Therapeutics’ lead scientist is Dr. Ido Bachelet, a Ph.D. in medical sciences from Hebrew University who completed his postdoctoral training at MIT and Harvard at the George Church laboratory. Dr. Bachelet is a recognized pioneer in therapeutic DNA nanotechnology and synthetic biology as well as the founder of several companies in the pharmaceutical and diagnostics industries. Bachelet and Nacht have partnered several times in the past, including in a company named Wild Biotech, which is developing an AI-powered drug-discovery platform that can jumpstart the creation of new medicines for a vast array of illnesses, and Aummune, which creates individualized therapeutics designed to specifically target each stage of a patient's disease.