Google’s newest initiative builds upon its existing programs and partnerships which include Adva, a two-year computer science training program for ultra-Orthodox seminary girls, as well as a program beginning this month to integrate final year Arab engineering students into high-tech in collaboration with Tsofen

Ruth Porat, CFO of Alphabet and Google, announced on Sunday that Google is funding a $25 million skilling initiative over five years to increase opportunities in Israel’s hi-tech sector for underrepresented groups, including women, Arab citizens, ultra-orthodox Jews and residents of the geographic periphery. Google will also announce an initiative for the Palestinian tech sector later this week.

Porat arrived in Israel Saturday evening and will be meeting with Israeli and Palestinian entrepreneurs and business leaders, policymakers and Google employees during her visit. Along with the United States Ambassador to Israel, Thomas R. Nides, she met today with women and Arab entrepreneurs, engineers and investors to hear about the challenges they have faced integrating into Israel’s hi-tech industry. 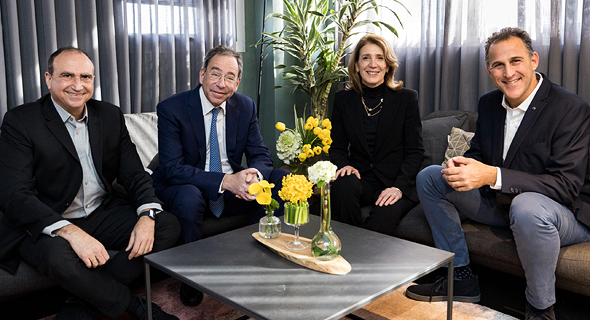 Barak Regev (from right), Ruth Porat, U.S. Ambassador to Israel Thomas Nides and Yossi Matias. Photo: Tomer Poltin
Google’s newest initiative builds upon its existing programs and partnerships that equip underrepresented groups with the skills and tools needed to succeed in tech. This includes Adva, a two-year computer science training program for ultra-Orthodox seminary girls that is run in partnership with Scale-Up Velocity, as well as a program beginning this month to integrate final year Arab engineering students into high-tech in collaboration with Tsofen. In 2021, Google trained more than 30,000 people from diverse backgrounds across Israel in digital skills.

Porat joined Google as Senior Vice President and Chief Financial Officer in May 2015 and has also held the same title at Alphabet since it was created in October 2015. She is responsible for Finance, Business Operations and Real Estate & Workplace Services. Before joining Google, Porat was Executive Vice President and Chief Financial Officer of Morgan Stanley and held roles there that included Vice Chairman of Investment Banking, Co-Head of Technology Investment Banking and Global Head of the Financial Institutions Group. Ruth is a member of the Board of Directors of Blackstone Inc., the Stanford Management Company and the Council on Foreign Relations, and the Board of Trustees of Memorial Sloan Kettering Cancer Center. She previously spent ten years on Stanford University’s Board of Trustees. Ruth holds a BA from Stanford University, an MSc from The London School of Economics and an MBA from the Wharton School.

“At Google, we believe that to have sustainable economic growth, you must have inclusive growth,” said Ruth Porat, Alphabet and Google CFO. “By providing members of underrepresented groups with a path into tech, we hope to help create a more diverse workforce, and increase opportunities for a broader group of people. We look forward to deepening our commitment to Israel as we work to support the government's ongoing efforts in this area.”

“My first meeting as Ambassador was with Arab business leaders in Israel to talk about increasing access to greater economic opportunities, and Google’s announcement today is a strong practical step toward that goal,” said U.S. Ambassador to Israel Thomas Nides.

Related articles:
“We in Israel aspire to reach one million Israelis working in hi-tech. This is our comparative advantage. This is our way of ensuring Israel will be an innovative and advanced country with a high standard of living and quality of life”, said Minister of Foreign Affairs Yair Lapid. “The way to do this is to bring additional, diverse populations into the field: something which will also contribute to the hi-tech industry itself. This is a national mission which cannot succeed without cooperation with major employers in the field. Israel is well-positioned and has the potential to be one of the ten most successful countries in the world, and this will happen through initiatives of the kind which Google is announcing today.”