TAGS:
Intel subsidiary Mobileye will test and deploy robotaxis powered by Mobileye’s autonomous vehicle technology in Daegu, South Korea, Mobileye co-founder and CEO Amnon Shashua announced at a press conference at the 2020 Consumer Electronics Show (CES) Tuesday in Las Vegas. The city of Daegu will be responsible for the regulatory requirements supporting the establishment of the robotaxi fleet operation, Shashua said. Mobileye intends to roll out the autonomous taxis in Daegu by 2022, Shashua said. 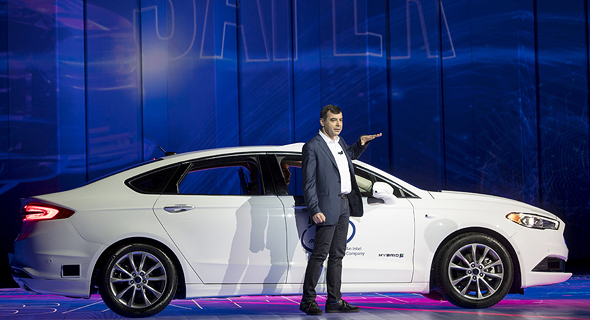 Mobileye CEO Amnon Shashua. Photo: Bloomberg
Last year at CES, Shashua announced that the company intended to have hundreds of autonomous taxis operating in Tel Aviv’s streets also by 2022. Also dring this year’s press conference, Shashua announced that state-owned Chinese automaker SAIC Motor Corporation Ltd. will use Mobileye’s road experience management (REM) mapping technology on SAIC vehicle. SAIC will use the technology to gather information on China’s roadways to create a real-time, high-definition map of the country that can be used by autonomous vehicles.

This is not the company’s first partnership with SAIC. At the 2018 CES, Intel CEO Brian Krzanich announced that Mobileye and SAIC would be partnering to jointly develop autonomous vehicles.

In 2017, Mobileye was acquired by Intel for $15.3 billion, in the largest deal Israel's tech industry has seen to date. Shashua stayed with the company, becoming a senior vice president at Intel while continuing to lead Mobileye, which became the corporation's global autonomous vehicle development center.

The author was a guest of Mobileye at CES.
Recently Read

The Waze of construction? Constru helps real-estate developers with their time and money
Recommended videos