The War on Coronavirus Brings With it a Dangerous Fog

With nothing else to report on, mainstream media, social media, and fringe media are all inundating the public with so much conflicting information that they are all actively contributing to confusion and even false hopes regarding the pandemic

U.S. President Donald Trump has referred to himself as a wartime president, fighting a battle against the invisible coronavirus (Covid-19) enemy. To embrace Trump’s metaphor, it is crucial to consider one of war’s constants: the fog of war. The concept of fog of war illustrates the imprecision of information that is often a tradeoff for speed at the heat of battle. This lack of clarity is magnified during the current pandemic by the need to fill the voracious 24-hour news cycle at a time when nothing much else is going on both domestically and internationally.

With nothing else to report on, mainstream media, social media, and fringe media are all inundating the public with so much information, conflicting information,  misinformation, fake news, and unverified information, that they are all actively contributing to this fog. This deluge of data includes information regarding all aspects of the current pandemic from a variety of sources: politicians, regulatory agencies, commercial companies, conspiracy theorists, friends, family, and other unverified sources. Together, they provide readers and viewers with information relating to government subsidies, the nature of Covid-19 symptoms, potential efficacious drugs and vaccines, Covid-19 testing, the virus’ origin—be it Chinese or even American—quarantines, and many other complex scientific and political ideas that are relevant to our lives as the virus continues to rage. 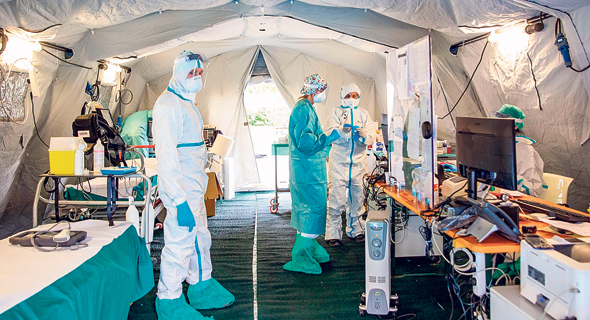 A healthcare unit for corona patients in Italy. Photo: Bloomberg
While most of the inaccurate information is harmless, eventually corrected, or forgotten, other pieces of information can persist, continuing to misinform and even provide false hopes. Ideally, in most areas, we should all go by the recently tweeted mantra of former New York Mayor Michael Bloomberg: “in God we trust, everyone else should bring reliable data.” Trapped in the thick fog of war, however, we often only have unreliable, second hand or anecdotal information to go on. It is also worth noting that, often, even initially reliable research-based data and procedures lead to or are based on assumptions that may change over time.

One particularly incessant piece of information that may be dangerously inaccurate is the idea that a vaccine will be available to everyone within 12-18 months. Even with Cambridge, Massachusetts-based company Moderna Inc. developing a candidate messenger RNA vaccine within a record-breaking period of just 42 days, this is still a hugely optimistic timeline according to many vaccine specialists.

The process of vaccine development and approval is typically long and arduous. In the U.S., for example, the Center for Biological Evaluation and Research (CBER) regulates most approvals of vaccines, as per the Public Health Service Act of 1944 and the Federal Food, Drug and Cosmetic Act of 1938.

But, before a vaccine even gets to the CBER’s assessment process, there is typically a period of between two years and four years of basic scientific research. This type of research is going on right now all around the world, with reportedly 70 different vaccines for the severe acute respiratory syndrome coronavirus 2, (SARS-CoV-2) —also known simply as coronavirus—currently in development.

Then, as is the case with many standard drug evaluations, following the exploratory and pre-clinical cell, tissue, and animal investigatory process, a putative vaccine manufacturer submits an investigational new drug application (IND) to the regulatory body. Once the U.S. Food and Drug Administration (FDA) approves the IND, the pre-marketing vaccine trials consist of three phases to slowly and painstakingly assess the effectiveness and safety of the vaccine.

In the first open nonblinded phase, a small group of usually less than 100 individuals is initially used to assess the safety of the vaccine for human subjects and its ability to successfully challenge its corresponding pathogen. In the second randomized phase, several hundred individuals are recruited to determine desired dosage, delivery methods, immunogenicity—the ability to provoke the necessary immune response—the necessity of an adjuvant agent, and other important factors. The third and final double-blinded phase may include thousands of volunteers in an effort to—among other safety issues—tease out rare side effects and other adverse reactions.

Successful completion of these trials is followed by a biologics license application (BLA) that is reviewed by a competent and multidisciplinary FDA review team. Officially, the BLA is a "request for permission to introduce, or deliver for introduction, a biologic product into interstate commerce.” If the BLA is approved, a non-FDA expert committee, the Vaccines and Related Biological Products Advisory Committee (VRBPAC) provides a further assessment before the vaccine can finally move on to commercial use.

On average, this entire process takes anywhere from 10 to 15 years. Some lucky vaccine producers have been able to rush through the process in as little as four or five years, but those are clearly outliers. In other instances, half-finished vaccines that were put on hold were later revived and completed when the demand or need arose, for example, in the case of Ebola, cutting down much of the development time. Early on in the spread of the pandemic, with only 100 cases in the U.S., President Trump promised a vaccine in three to four months. Anthony Fauci, head of the National Institute of Allergy and Infectious Diseases (NIAID) quickly countered with a more expansive timeline of 12-18 months. However, as often as it is robotically repeated, even this timeline seems optimistic given the standard process outlined above. Still, shortcuts like adaptive trial design and emergency use authorizations (EUAs) that allow the use of unapproved medical products when there are no alternatives, are available and will hopefully speed up the process. Several EUAs have already been issued in the fight against the current pandemic. Assuming a successful rushed vaccine soon enters the market, professionals still worry about the fallout from a potentially suboptimal vaccine. In a best-case scenario, a failed vaccine erodes the public’s trust in this and other vaccines, further strengthening the growing anti-vaxxer community. In a worst-case scenario, the vaccine itself could be ineffective or even dangerous. History is full of examples of rushed failures: vaccines for the Human Respiratory Syncytial Virus (RSV), the 1976 swine flu, or the 2017 dengue vaccines, to name a few, caused many patients to become ill and even die. Another scientific concept that is bandied around is herd immunity, that some assume will save us from the virus. The term refers to the hope that once a sufficient percentage of the population is infected, life could go back to normal as there will not be enough infectible human hosts for the virus to effectively spread among the general population. While herd immunity is an important component within many efforts to deal with all types of infectious diseases, it is still unclear if long term, or even any, immunity to this novel coronavirus develops as someone recovers from an infection. In South Korea, for example, over 100 patients considered to have recovered from Covid-19 are now ill again.  Other viruses in coronavirus’ family that cause common colds are known to recur, even when the patient has already had the disease.These infections reappear, however, not because the virus mutates, as in the case of the flu, but rather, according to research, because our immune memory—our ability to rapidly ramp up a defense against a pathogen—for this particular virus family seems to be weaker than for other virus families.

It also goes without saying that anecdotal information, in contrast to reliable studies regarding potential anti-coronavirus drug regimes, can be dangerous.  Consider the often suggested antimalarial drug Chloroquine, which is not only not yet proven to be efficacious for Covid-19 by sufficient scientific trials, but can also be dangerous, given possible medical complications and contraindications. Moreover, the arguably undeserved interest in unproven remedies is actually hurting scientific efforts to research other potential cures.

Unfortunately, as in all wars, there are those that are taking advantage of the coronavirus fog. In one example, Israel’s Ministry of Education recently notified the parents of thousands of high school students that their children’s planned and already paid for trips to concentration camps in Poland have been canceled due to the pandemic, while the tour company, a subsidiary company of the Jewish Agency, reportedly denied any reimbursement.

But, not all is bad with regard to fog during this pandemic. With all the quarantining, sheltering in place and furloughs, there has been a significant reduction in cars on the road, either by design, or by choice. Without their concomitant pollution, there seems to be much less smog in the atmosphere and much cleaner air.