The Unicorns Are Stomping Over the Small Investors

The current IPO wave of companies like Uber and WeWork is the largest since the dot-com bubble, but their huge valuations may mean that by the time they become public, small investors are too late for the party

TAGS:
When the term “unicorn” was coined five years ago, there were around 30 global companies valued at over $1 billion. In the years since, their numbers have swelled, and unicorn has become one of the most overused buzzwords in the tech world. Over 300 unicorns exist today, according to research firm CB Insights. Just on Saturday, online learning startup Coursera joined the club when its $103 million investment round pushed it over the $1 billion mark.

But as the club peaks, it seems its most prestigious members want out, leading to what some already term an “IPO frenzy.” Uber’s smaller rival Lyft, social media network Pinterest, and video conference software developer Zoom Video Communications Inc. have all listed in New York recently. Software companies Palantir Technologies Inc. and Slack Technologies Inc. are also on their way. On Monday, coworking super-company the We Company, formerly WeWork, worth $47 billion according to its latest valuation, announced it had filed a confidential prospectus at the end of December. Earlier this week, Airbnb’s CEO and co-founder Brian Chesky told Reuters the company will be ready for an IPO later this year.

Nasdaq. Photo: Shutterstock
But the most anticipated IPO since Facebook listed in 2012 is Uber, the ride-sharing company that has conquered most of the world and wants to raise up to $9 billion according to a company valuation of $85 billion. 2019 is expected to be a record year in terms of money raised via IPOs, more than was raised in the dot-com bubble of 1999 and 2000, Kathleen Smith of financial investment firm Renaissance Capital told Fortune Magazine earlier this month.

And there’s an Israeli angle. After a drought of large tech IPOs, cybersecurity company Tufin Software Technologies Ltd. raised $108 million on NYSE, according to a company valuation of almost half a billion dollars—a positive sign for three Israeli companies currently intending to list according to a valuation of over half a billion dollars: online gig marketplace Fiverr Int. Ltd., online payment company Payoneer Inc., and cloud backup company Zerto Ltd.

Taxi-hailing company Gett, one of Israel’s rare unicorns, is also looking to ride the tail wings of Lyft and Uber with an IPO of its own at a valuation of over $1 billion.

Comparisons to the dot-com period are almost expected, and the numbers mostly seem to add up. In 1999, the “hottest” year for tech IPOs, 510 tech companies went public in the U.S., after 363 companies listed the year before. 2018 was considered a respectable year, with 190 IPOs after a five-year drought—but the four first months of 2019 already saw several dozen companies go public, with those currently in the process of listing bringing the number up to 200.

Gett's CEO Dave (Shahar) Waiser. Photo: PR
There are several major differences, however, compared to the IPO wave of 1999, all of which should hint to small investors that maybe they are late to the party. Recovery from the financial crisis of 2008 was the theme of the last decade, much of it supported by minuscule interest rates that in turn led to colossal amounts of money being funneled into private equity funds in search of higher yields. That money, in turn, was offered by the bucketload to private tech companies, creating the unicorns of today, which had no need to go public—and transparent—in search of funds. 2016 saw only 54 IPOs on Nasdaq. The following two years were slightly better, but while 2018 saw IPOs worth a cumulative $50 billion, private equity and venture capital investments in tech companies that year amounted to $131 billion—a 58% increase from 2017, making for the tenth consecutive year of growth. And therein lies the reason for the current IPO frenzy. Venture capital and private equity firms have a typical lifespan of 7-10 years from investment to sale. These funds must justify their large investments to their own investors, and therefore cannot have portfolio companies that devalue. In recent years, much criticism has been made of the huge sums that change hands with private investments. Uber’s latest round, for example, was made according to a $70 billion company valuation, and any sale of its shares according to a lower valuation will mean a loss to existing shareholders. They are faced with two scenarios, then: sell to another fund, a rather unrealistic objective considering the exorbitant price tag, or list the company and hope the public pays more. The current stock market conditions in the U.S., with the Nasdaq Composite Index back above 8,000 points, are particularly welcoming for exits. And that’s a problem for small investors. Unlike 1999, the companies looking to become public today are much more mature—some will say too mature—and weighed-down by private money that is just looking for a way out so it can be reinvested in smaller, younger companies. Uber raised $20 billion to date. Lyft raised $5 billion. Dropbox, which went public last year, raised $750 million in its IPO but $1.7 billion as a private company. WeWork raised $8.4 billion. Another indication of the difference in character is the issue of stock performance. Both Nasdaq and NYSE like to perform their IPOs at slightly under the agreed upon price, to give stockholders the spectacle of a sharp increase in the first few days of trading. But in the past few years, that mechanism has wobbled, hinting that the companies listing at such high valuations are just not delivering the goods. Snap Inc., the developer of Snapchat, one of 2017’s “sexiest” IPOs, is still 30% down from its IPO valuation despite gaining back 100%. Lyft, which listed at the end of March, is already on the list of the top 30 companies shorted by sellers. Both companies are facing lawsuits from investors who feel they have been duped. According to Goldman Sachs, over the past two years, newcomers lost on average 8% of their valuation post IPO. At the same time, the S&P 500 index rose by 12%. 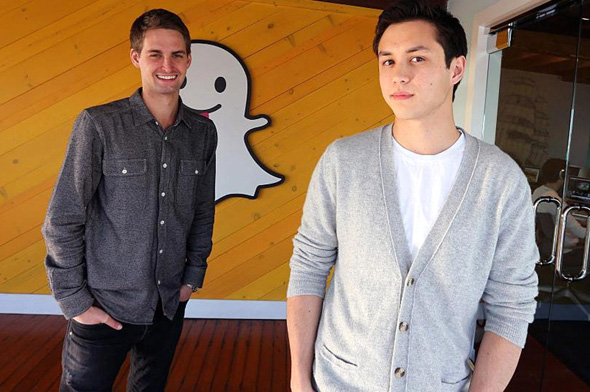 Snapchat co-founders Evan Spiegel and Bobby Murphy. Photo: Getty Images
Investors are drawn to tech companies because their fast growth is supposed to counterbalance their higher risk factor. Google and Facebook were both already profitable when they went public. But the current wave of listers is not. Snap has ended each year since 2011 in a minus, ending 2018 with losses of $1.3 billion. Slack revealed in its prospectus that while it has doubled its revenues annually for the past three years, it has still ended each year with a loss of around $140 million. WeWork lost $1.9 billion in 2018. Uber lost $1.8 billion and explicitly stated in its prospectus that it may never become profitable. In fact, 83% of U.S. companies that went public in 2018 recorded losses in the 12 months that predated their IPO, more than was seen just prior to the dot-com crash. Will the public put its money into Pinterest, Uber, and Lyft with the same confidence that private investors showed, or are those companies past their peak? There is an important case study to remember, however. On April 2004, a well-known but still smaller than its then-rivals company called Google submitted an IPO prospectus. It was seeing annual revenues of almost $1 billion at the time, and looking to raise $2 billion according to a $30 billion valuation—an unprecedented IPO in terms of size at the time. Like Uber, investors were hyped. But by the time the company listed in August, that hype was overshadowed by concerns regarding Google’s capacity for growth and competitive edge. Google had to settle for a $24 million valuation, and most expected the company’s stock to drop by the close of its first trading day. Google closed 18% up. And today the company is traded at a market capitalization of $812.09 billion.
Related stories:
Alongside the need private equity and venture capital firms have to liquidate their assets, they are also keeping in mind the stock market crash of December 2018. Despite the sharp jumps stock markets have seen in recent months, which made the start of 2019 the best opening seen since 1987, no one is doubting that a turnaround is coming. And no one wants to get stuck with their investment during a period of potential economic recession and stock market weakness. But that hurry to sell can also prove a boon to small investors. For years, the venture capital industry and the CEOs of the unicorns were criticized for turning tech investments into a wealthy only prerogative, barring the public from participating in the game. Now everyone can invest in the companies they see and use in their daily lives—unless, of course, it is not too late or too costly, exactly the opposite of the sharing economy these companies rose to fame championing.
Cancel Send
To all comments