An Explosion, a Failed Satellite, and a Legal Probe: Exiting CEO Comments on Spacecom's Turbulent Decade

After 24 years as CEO of Israel’s only satellite company, David Pollack stepped down Wednesday, leaving behind a company he believes is on the rise

TAGS:
Nothing prepared David Pollack, then-CEO of Tel Aviv-listed satellite company Space Communication Ltd. (Spacecom), for the events of September 1, 2016. Pollack just boarded a flight to attend the launch of Spacecom’s new satellite, AMOS-6, from Space X’s platform in Florida. His plane was equipped with internet and live television broadcasts, which meant that Pollack could watch the satellite burst into flames just hours before its planned launch. In a recent interview with Calcalist, Pollack recalled he saw smoke and thought to himself “I wonder who’s the poor guy that just lost his satellite.”

Pollack said it took him another 10 minutes to realize it was Spacecom’s satellite that was destroyed during pre-launch checks when its carrier SpaceX Falcon 9 exploded on its launch pad. “It was one of the most exquisite explosions I have ever seen in my life, a huge fire and a satellite that just disintegrated into nothing,” he said. 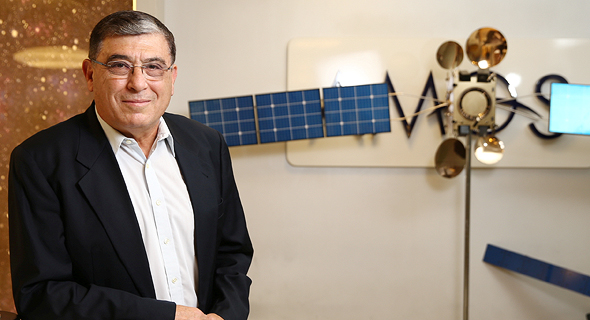 Spacecom's exiting CEO David Pollack. Photo: Orel Cohen
Thus began the downward spiral of Spacecome, a company once valued at NIS 1.2 billion (approximately $350 million) that at its lowest point dropped to a market capitalization of around one-tenth of that sum.

One year before AMOS-6’s untimely demise, Spacecom suffered its first disaster when the satellite’s predecessor, AMOS-5, which had a life expectancy of 15 years, stopped responding to communications while in orbit, just four years after its launch. When you get a call like that, realizing something this bad happened, “you have to be strong, otherwise it could kill you," Pollack said.

Sixty-seven-year-old Pollack stepped down Wednesday after 24 years at the helm of Israel’s only active satellite company, which spun off government-owned Israel Aerospace Industries Ltd. (IAI) in 1993. Pollack will be replaced by his deputy, Itzhak Shnaiberg, who will serve as acting CEO.

Pollack’s first two decades with the company were smooth sailing, followed by four years of never-ending turbulence. The misfortunes of AMOS-5 and AMOS-6 caused Spacecom to lose a $95 million five-year leasing contract with Facebook as well as a $285 million deal for its acquisition by Shanghai-listed telecommunication technologies company Beijing Xinwei Technology Group Ltd. Then, in 2018, came legal and financial troubles, combined. That year, heavy debt caused the assets of Shaul Elovitch, owner of Spacecom’s parent company Eurocom Group, to go into liquidation. Spacecom was left gasping for air, and potential buyers. In addition to his creditors, Elovitch was soon pursued by Israel Police on unrelated allegations concerning his telecommunications company Bezeq. The investigation started with an Israel Securities Authority probe into Bezeq's 2015 acquisition of satellite broadcaster Yes, and spun into "Case 4,000," for which Israeli Prime Minister Benjamin Netanyahu was recently indicted on charges of bribery and breach of trust. For years, Yes was Spacecom’s biggest client. As suspicions against Elovitch mounted, investigators turned to examine the connection between the two companies, suspecting a possible antitrust violation. According to Pollack, who was previously interrogated on the matter, when the contract with Yes was signed in the late 1990s, Elovitch had nothing to do with Spacecom. “He only decided to get in on Spacecom later, in 2000, after our success with Yes caught his eye,” he added. Referring to his retirement, Pollack hints he would have done so earlier if not for Spacecom’s recent hurdles. “Twenty four years as CEO of a public company is just too long,” Pollack said. “You get tired, you start to repeat yourself, and have a harder time doing things differently than the way you are used to,” he added. Spacecom is currently traded at a market cap of NIS 253 million (approximately $73 million). According to Pollack, Spacecom pulled itself together in 2019. He is leaving it after the successful launch of AMOS-17 in August. The company is negotiating with new clients and expecting several big contracts to be signed in the next few months, he said. “The company is in the process of recovering from a crisis that has passed, and is not currently in trouble,” he added. Today, Spacecom offers satellite communication services in Europe, Africa, and Asia through AMOS-3, AMOS-4, and AMOS-7. Once operational, AMOS-17 is intended to expand the company’s offering in Africa. For the first nine months of 2019, Spacecom reported NIS 215 million (approximately $62 million) in revenue, a similar figure to the same period the year before. However, it reported NIS 24.6 million (approximately $7 million) in profit for Q1-Q3 2019, compared to less than NIS 8 million (approximately $2 million), year-over-year. Five out of Spacecom's seven AMOS satellites were manufactured in Israel by IAI. In 2018, in a tender to construct AMOS-8, intended to replace the satellite Spacecom leased for $22 million a year following the destruction of AMOS-6, Spacecom chose Palo Alto, California-based Space Systems/Loral LLC over IAI, and all hell broke loose.
Related stories:
The Israeli government decided to intervene, informing Spacecom that the state intends to work towards placing a satellite by IAI at the geostationary position intended for AMOS-8, which belongs to Israel. “The state’s response was both surprising and demagogic and when someone is being irrational, it is not something you can predict,” Pollack said. Spacecom’s relationship with IAI and the government used to be fantastic but their conduct was ungrateful and unprofessional, he added. As a result of the state’s conduct, Spacecom had to cancel its deal with Loral, and subsequently also its launch deal with Space X. “Loral could have constructed AMOS-8 in time for the launch, as it was at the time the company with the most extensive experience in building commercial satellites. IAI would not have made it,” Pollack said. IAI has yet to respond to Calcalist’s request for comment.