Israel’s Kibbutzim Are Ahead of the Trend on Cannabis

Notable public figures have made headlines this past year by jumping on the cannabis bandwagon, but Israel’s former agricultural communes have identified the opportunity long before

TAGS:
Over the past year, medical cannabis has become the Tel Aviv Stock Exchange’s hottest trend. Mostly newly established companies in this field have attracted notable public figures such as former Israeli Prime Ministers Ehud Barak and Ehud Olmert and former Shin-Bet head Yaakov Peri, one after the other. But while politicians, businessmen, and former military officials are bringing their brand of glitz and glamor to the industry, Israel’s kibbutzim have been working behind the scenes to establish themselves for much longer.

Formerly socialist communes that made their living off the land, the decline of Israeli agriculture and simple manufacturing has seen most of the country’s kibbutzim fall from grace and become privatized. But in recent years, more and more kibbutzim have repurposed their wheat and corn fields for a new kind of plant. 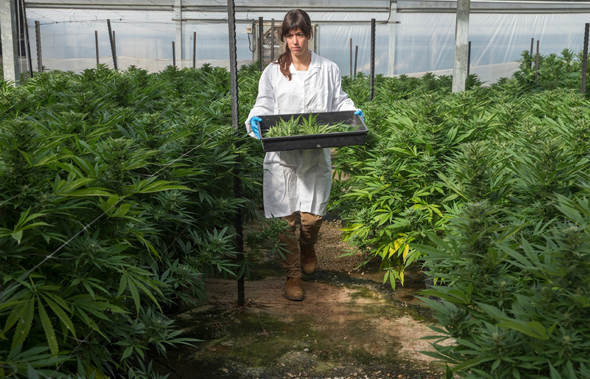 A cannabis greenhouse at kibbutz Revadim. Photo: BOL Pharma
Today, there are 14 kibbutzim in Israel that are either active growers of cannabis or in advanced stages of entering the domain. In the industry, estimates are that a third of Israel’s 270 kibbutzim are considering a pivot. While some early birds have made the change as early as 2008, most of the interest is a result of Israel’s decision to start setting up a regulatory framework in 2016. Only weeks later, a few dozen kibbutzim applied to the Israeli Ministry of Health for a preliminary permit. Since then, many kibbutzim have been putting aside between 4,000 and 200,000 square meters for greenhouses and production facilities and creating collaborations with private and public cannabis companies. “It was love at first sight,” Ran Gorelik, the Israeli representative of Toronto-listed cannabinoid company Cronos Group Inc., said in a recent interview with Calcalist. Cronos has a partnership with Kibbutz Gan Shmuel, located in Israel’s north, which has an advanced cannabis operation. “When Cronos looked for a partner in Israel, the Kibbutzim offered everything it looked for,” Gorelik said. “A size advantage, an existing infrastructure, and proven abilities as an agricultural organization.” Cronos and Gan Shmuel set up a joint company two years ago for the growth, manufacturing, and distribution of medical cannabis. Cronos always assumed Israel will authorize export at some point, Gorelik said, adding that they intend to be ready whenever export starts. The ready infrastructure found in Israel’s kibbutzim is bolstered by several other benefits the country offers, Gorelik explained: it is cheaper to manufacture here than in Europe or Canada, and Israel is also considered a global leader when it comes to cannabis and pharmaceutical research and development. Furthermore, Cronos is also aiming to supply to the Israeli market, he said. More local collaboration is that of kibbutz Dan and Israel-based home cannabis farming startup Seedo (incorporated as Eroll Grow-Tech Ltd.), which is traded on the U.S. OTC market. The kibbutz has considered the risks and decided that Seedo was an interesting business opportunity, Eitan Rahimi, Dan’s business manager, told Calcalist in an interview. As part of their deal, Dan is set to operate 12 three-story cannabis growing containers and additional facilities to be placed over 5,000 square meters. Seedo expects the partnership to generate 1.8 tonnes of dried buds worth NIS 36 million ($10 million) within three years. Kibbutzim can provide land both for growth and for production, lowering costs and creating one manager for all business aspects, Itay Hecht, CEO of cannabis company Hi Pharma Ltd., told Calcalist. Hi Pharma, currently in the process of merging with Tel Aviv-listed Ophectra Real Estate & Investments Ltd., has a partnership with kibbutz Ramot Menashe in Israel’s north. Ramot Menashe set aside 200,000 square meters for cannabis growth and 7,000 square meters for production, including an already existing facility that conforms to the GMP (good manufacturing practices) standard. Hi Pharma is contributing the knowledge. Israeli medical cannabis regulations also demand that employees hold Israeli citizenship, Hecht added, which Kibbutzim can also easily provide. “And the kibbutz is a brand name outside of Israel,” he said. “It is seen as something stable, and that helps raise money.” Kibbutz Kfar Masaryk, located south of Acre, pivoted to the industry two years ago after member Chen Flor recognized its potential and pushed for it in member meetings. “We wanted to continue traditional kibbutz values of working the land,” he said, and also realized that the kibbutz had an asset that could be used more efficiently. Initial plans are for 6,500 square meters of greenhouses, which could be expanded to as much as 20,000 square meters, and another 8,500 square meters of production facilities. “Alongside the inner-kibbutz reorganization, we started talks with four companies in the industry, which can come with the relevant knowledge as a strategic partner,” Flor said. “Despite what people think, each kibbutz has its own character and way of life, and not every partner will be a good fit.”
Related stories:
Lots of companies today are scouting kibbutzim for business opportunities, Doron Arami, head of the medical cannabis sector at the Israeli branch of international accounting firm BDO, told Calcalist. Israeli regulation conditions an initial permit for growing cannabis on having a “connection” to a land and an existing water quota, both of which come with kibbutzim in a packaged deal, he said. More than large plots of land, Kibbutzim have can also provide industrial spaces, Arami said. “That alone saves NIS 1.5 million ($420,000) a year on security and transport costs,” he said. Under Israeli law, companies that generate more than 25% of their revenues through exports enjoy various tax exemptions and benefits, he added, and the rural location of most kibbutzim also awards tax benefits. On their side, Arami said, kibbutzim will see more money from medical cannabis than from other agricultural products.
Cancel Send
To all comments
Buzz